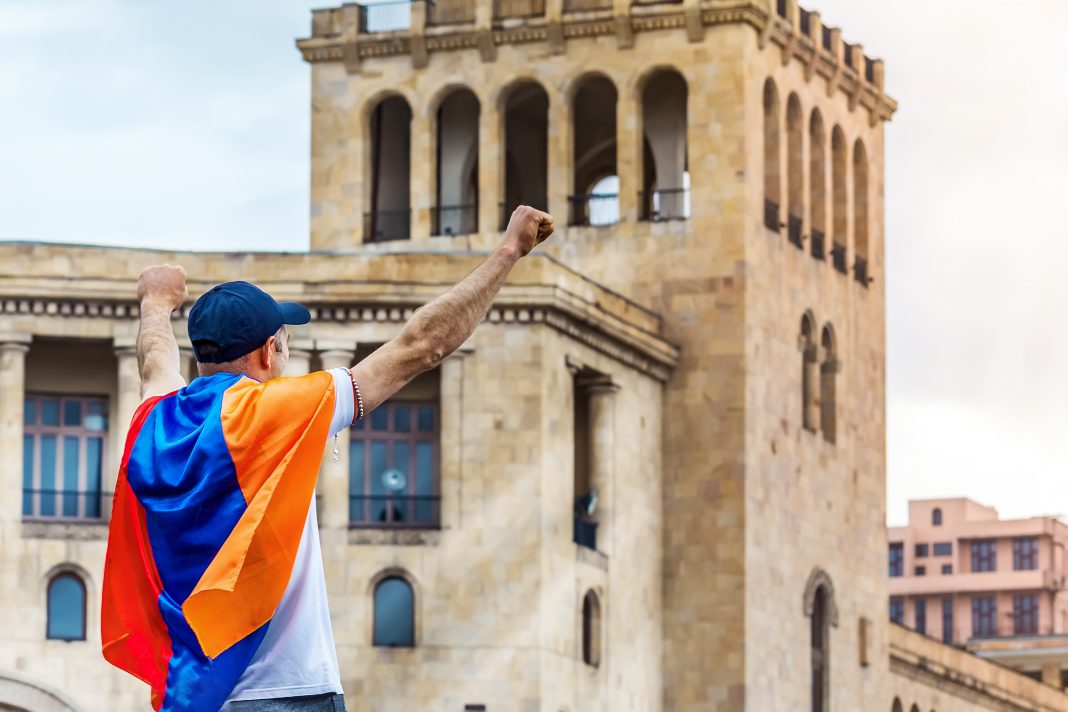 The Republic of Armenia has set a tremendous example for the rest of the world by peacefully ousting a corrupt political regime in the spring of 2018. Last year, it was deemed the ‘country of the year’ by the Economist in light of its Velvet Revolution: a nonviolent, youth-led mobilization of the general population eager for domestic political, economic, and social change. Starting April 14, 2018, hundreds of thousands occupied the streets in major cities, strategically and most notably, nonviolently, blocking entrances to government and police buildings. Velvet Revolution leader and current Prime Minister Nikol Pashinyan launched this movement by marching across Armenia in early April, garnering crowds of over 100,000 people along the way to Yerevan. Pashinyan is an ex-journalist, a former parliamentarian, and was previously a political prisoner. He had and still carries a strong vision and drive to mobilize an entire country to create a ‘New Armenia’: one that stands in solidarity and is unafraid to tackle corruption and inequality.

In 2015, a constitutional referendum was signed to take effect in April 2018 that would change Armenia’s state system from a presidential to a parliamentary one. On April 17, the Armenian Parliament voted for former President Serzh Sargsyan to become prime minister. This caused widespread disapproval and civilian unrest. The majority of the population protested daily in response to the Republican-majority vote to keep Sargsyan in power, despite already reaching his two-term limit as president. On April 23, however, Sargsyan resigned, and Yerevan’s streets were filled with thousands of people, dancing, singing and celebrating a victory by the people, for the people, without a bullet fired.

Several factors contributed to the movement’s success. Pashinyan’s emphasis of non-aggressive rhetoric in his speeches to mobilize the masses with statements such as ‘there is only love in our hands’ was vital. The term ‘Velvet Revolution’ itself highlights the movement’s peaceful character, akin to other post-Soviet revolutions. However, the Velvet Revolution would not have been possible without the participation and passion from Armenia’s youth. It was no easy task to mobilize an entire country of 3 million people to rise against the the country’s poor leadership. The Velvet Revolution is commonly referred to as a youth-led movement in the media. During protests, students in Yerevan studied for exams in the streets, playing volleyball, and creating clever slogans such as ‘Merzhir Serzhin’ (Reject Serzh), ‘Qayl Ara’ (Take a Step), and ‘Duxov’ (With Courage.)

Protests have been a part of Armenia’s recent history and were normally met with police brutality and governmental gridlock. Less peaceful examples include movements such as Electric Yerevan in 2015, where mass protests took place due to unforeseen hikes in electricity prices, and the Summer 2016 riots in response to the rise in political arrests where real systemic change did not occur. Ten years ago, ten civilians were killed in protests that lasted for ten days in Yerevan in response to Sargsyan’s presidential victory. Learning from their past, Armenians confronted these challenges in 2018. They understood the power of words, and that their country would not grow without systemic change in leadership; a change in government and political culture, and moreover, a change in mentality towards this harsh reality.

Located in the South Caucasus, Armenia was a member of the Soviet Union and still has a working relationship with Russia. It is a landlocked country enjoying good relationships with its neighbors Georgia and Iran, but it has closed borders with Turkey and Azerbaijan. This complicates Armenia’s access to foreign capital and the region’s natural resources, causing financial risk and limited trade. Other countries such as Georgia in the Rose Revolution, and Ukraine in the Maidan underwent upheavals similar to Armenia’s, but they did not end without bloodshed and still have massive impacts on their domestic political and economic development today.

Like its rich yet tragic past, Armenia’s story today is one of perseverance, uncertainty, and survival. Situated in a tumultuous pocket of the globe, little yet mighty Armenia experienced a political awakening that should be viewed as a success story to emulate for countries facing similar hardships. Despite its struggle to deal with its Soviet past, which still plagues the country with deep political corruption, economic inequity, and social inequality, Armenia is turning these prominent sources of instability on their head.

As of December 9, 2018, the Armenian people freely and fairly elected Prime Minister Nikol Pashinyan, and a new parliament that is dedicated to creating a ‘New Armenia’. Within his first 100 days, Pashinyan removed the former chief of police who was notoriously corrupt. In addition, law enforcement officials are revealing how billions of dollars were being pocketed by rich oligarchs thereby undoing monopolies that have robbed the people for decades. At present, the percentage of female representation in the Armenian parliament is higher than those of the Russian and US governments, Armenia’s IT sector contains tremendous promise for economic growth, and the EU and the World Bank have allocated over 732 million euros for improved infrastructure and transport, allowing for increased connectivity in Armenia and the region.

In the future, Armenia should continue to learn from the past, looking critically at itself, and at countries dealing with similar hardships. By focusing on its economy for long term stability and development while continuing to combat political injustice, the new government can avoid policy mistakes and mitigate risk, emboldening new ideas from a ‘New Armenian’ youth. While the future is uncertain, there is a lot of hope for Armenia in 2019 to modernize: the people know they are capable of change in a nonviolent, transparent manner, and can mobilize if necessary.

“I broadly think the change of regime in Armenia is positive, allowing in a new generation who really want to tackle Armenia’s problems,” said regional expert Thomas de Waal in an interview with Caucasus Watch, noting the revolution’s potential for the country’s future.

“This generation is not corrupt and this leadership has a real legitimacy. I hope they will not squander that legitimacy.”