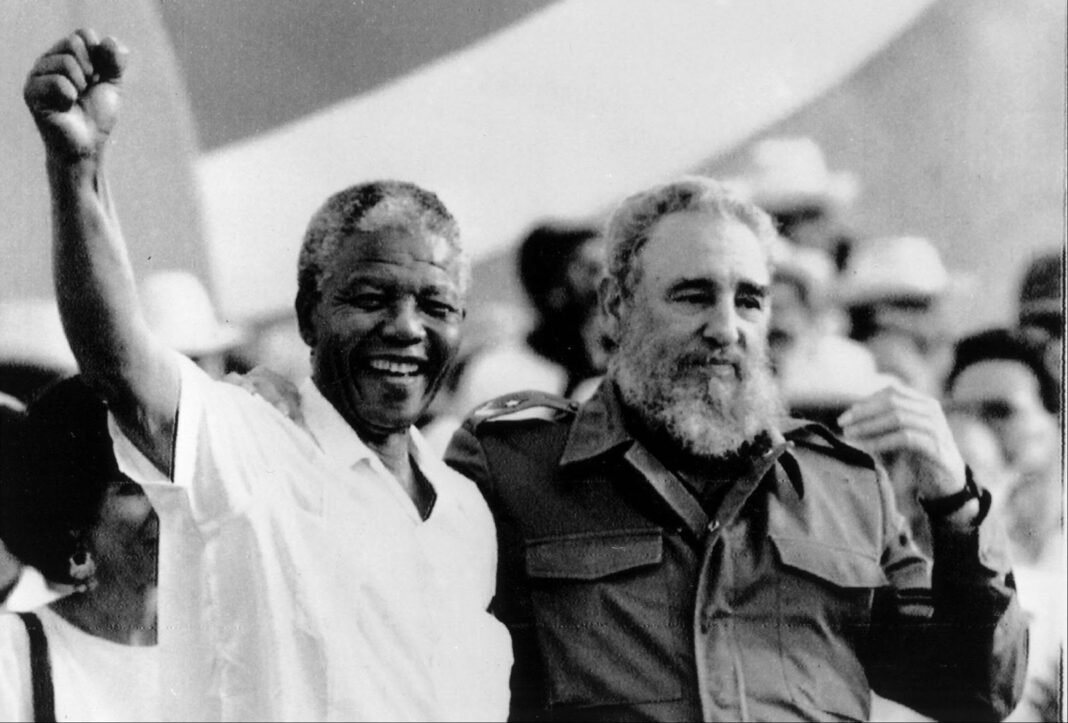 “Cuba is the only country in the world that sent its soldiers to confront the army of apartheid.” With this controversial quote, prominent Cuban Historian Piero Gleijeses brings to the fore a seldom spoken about topic: Cuba’s role in liberation struggles throughout Africa. From Algeria to Angola, and subsequently Namibia and South Africa, Cuba has assisted, both militarily and diplomatically, independence struggles throughout the continent. The support has earned Cuba a different reputation in these respective countries than that broadcasted in most Global North countries; namely, Cuba as one of the worst dictatorships in the world versus Cuba as a humanitarian beacon, willing to send its medical personnel anywhere they are needed.

Cuba’s liberatory relationship in Africa began in 1961 when the newly established socialist republic began providing military and civilian assistance to the Algerian National Liberation Front (FLN). This aid consisted of a substantial amount of U.S-made weaponry and military advisors and had implications far beyond the borders of Algeria. Despite the mainstream portrayal of Cuba only as a client state of the Soviet Union during the Cold War, Cuba’s role in Algeria was a solitary endeavor and geo-strategically myopic. Gleijeses explains that backing the FLN was extremely inconvenient to Cuba’s interests, as it angered President de Gaulle of France, who was willing to otherwise have normal relations with Cuba, partially as a way to spite the United States. An unnamed senior Cuban official stated, “We knew we would incur de Gaulle’s hostility, and we were ready to pay that price…”

Although it was less costly, both monetarily and geopolitically, to maintain a cordial relationship with France, the nascent Cuban republic chose to assist a fellow liberation movement. Additionally, it is important to note that Fidel Castro’s faction within the Communist Party of Cuba, was particularly critical of the Soviet Union’s “United Front” policy, a policy which in practice meant that the Soviet Union would prioritize supporting only pro-soviet socialist movements. While in the 1970s relations between the Soviet Union and Cuba began to thaw again over this issue, Cuban policy in Africa remained consistent, and thereby independent of Soviet influence, throughout the rest of the 20th century.

This is not to say that Cuban-Soviet geopolitical interest in Africa did not often align; on the contrary, particularly after the 1970s, Pro-Soviet socialist movements in Africa began to receive significant help from Cuba. A well-documented example of this is Cuba’s extensive support for the People’s Movement for the Liberation of Angola (MPLA) during the Angolan war for independence and the ensuing civil war. Cuba’s support goes back to 1965, as Cuba saw Agostinho Neto’s struggle against Portugal as a struggle against colonialism. Cuba’s support continued in the MPLA’s subsequent fight against the Zaire-funded, and CIA assisted, National Liberation Front of Angola (FNLA). This took on additional meaning to the Cuban government as a continued fight against the enemies of the Cuban Revolution due to Zaire’s employment of Cuban exiles.

Although the Soviets provided arms to the MPLA, by June 1975, Cuba bore the brunt of training and advising the MPLA struggle, as Soviet-MPLA relations began to seriously deteriorate. In total, from 1979 to 1991, about 370,000 troops and 50,000 civilians (mostly teachers and doctors) were sent from Cuba to Angola. By the late 1970s, the civil war was already extremely complicated, as it risked descending into a proxy war between the US and the USSR. And yet, it became further complicated by the substantive entry of the National Union for the Total Independence of Angola (UNITA) as the dominant opposition to the MPLA. UNITA’s main benefactors were the United States and South Africa, which had become particularly concerned with the South West Africa People’s Organization’s (SWAPO) operations across the Angolan borders.

In a 1991 visit to Cuba, Nelson Mandela thanked the Cuban people for their support against apartheid and stated that “the Cuban victory destroyed the myth of the invincibility of the white oppressor and inspired the fighting masses of South Africa. Cuito Cuanavale [a decisive Cuban/Angolan victory] is the turning point in the liberation of our continent and of my people from the scourge of apartheid.” This was plausible, as the news of a predominantly Afro-Caribbean beating an all-white anti-insurgency force would shatter the false reality of superiority built by the racist regime. In addition to beating the “white giants” in Angola, the Cubans also trained and supported the ANC in their struggle in South Africa.

Cuba’s role in liberation struggles from North Africa to South Africa has been instrumental to the independence of a multitude of states in the continent. This important role is seldom brought up in contemporary depictions of African struggles for independence, particularly when speaking about the anti-apartheid movement. This act of historical revisionism is a way for western governments, who historically and contemporarily preached decolonization and democracy, to whitewash their inaction in the face of brutal colonialism and apartheid. While Cubans were bleeding and dying throughout the African continent, many governments in the Global North were more than comfortable to benefit from the resources extracted from these exploited peoples. The US was content using apartheid South Africa as a strategic partner against communism, while Britain and France were more than willing to maintain trade relations with the regime. While it is important to point out and criticize Cuba for its issues and faults, it is equally as important to understand and give credit to its support of anti-colonialist and anti-apartheid struggles. Ultimately, when the world turned a blind eye to the exploited peoples of the African continent, Cuba was the only country in the world that sent its soldiers to confront and defeat both the army of apartheid and colonial forces across Africa.