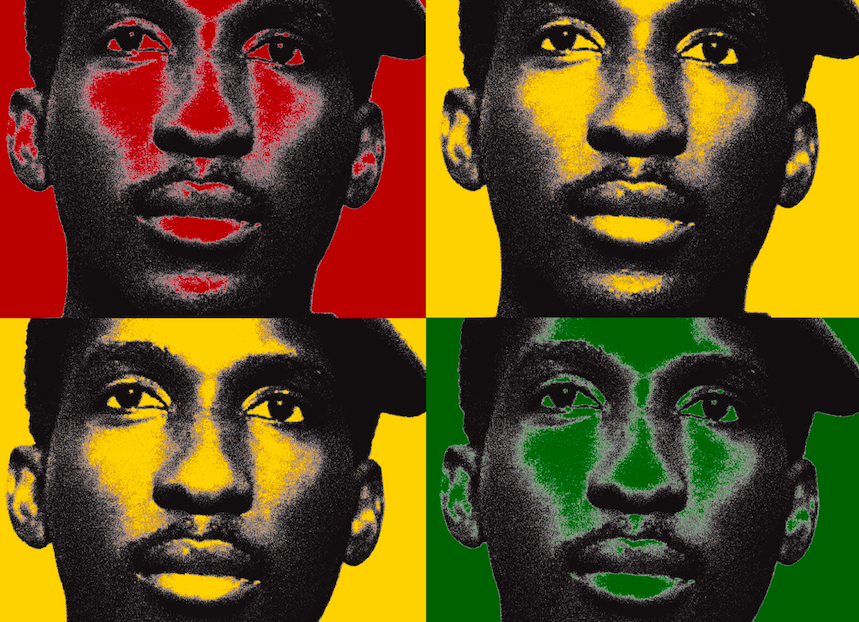 A surviving witness described the gunfire from Kalashnikov rifles as rain falling on a tin roof. Within a matter of seconds, Thomas Sankara, Burkina Faso’s young and charismatic president, was dead. For more than three decades, his death in 1987 has remained an open wound in the former French colony.

At age 33, the skilled jazz musician and army captain rose to power in a military coup in 1983 and launched a radical political and economic experiment unlike any other on the African continent. Many of these dramatic reforms transformed the state – in some cases literally. On the first anniversary of his presidency, he changed the name of the country from the colonial “Upper Volta” to “Burkina Faso” meaning “Land Of Upright People” in Mooré and Dioula, two of the major languages of the nation, and gave it a new flag as well as a new national anthem.

After taking office, Sankara’s first priorities concerned food self-sufficiency, medical care and education. He therefore launched a mass vaccination program in an effort to eradicate polio, meningitis and measles, and literacy rates soared from 13% in 1983 to 73% in 1987 thanks to the newly free, compulsory education. Besides that, the “poorest president in the world” embraced personal austerity and limited his possessions to a car, four bikes, three guitars and a fridge.

“We Have to Depend on Ourselves”

His aim was the construction of a national economy that was “independent, self-sufficient and planned at the service of a democratic and popular society.” Several points stood out. First, economic projects had to use local labour, materials and financing whenever possible in an attempt to reduce reliance on foreign aid and imports. Second, financial resources of the government were allocated primarily to rural areas instead of urban centres. In a five-year plan, two thirds of projected investments were allocated to agriculture, live-stock, fishing, wildlife and forests. Lastly, in a country with sparse rainfall and a harsh climate, environmental concerns had to be integrated into all development efforts. Sankara’s plan of planting 10 million trees to prevent desertification later served as a model for the African Union’s Great Green Wall project.

“Women hold up the other half of the sky”

Sankara also understood the importance of equality of women, often well before many of his western contemporaries. He encouraged girls to finish secondary school and earn an income, introduced voluntary family planning programs and required schools to allow pregnant students to return to finish their education. Furthermore, the president outlawed practices like female genital mutilation, forced marriage and polygamy, appointed women to high government positions and introduced mandatory participation in village governing committees. In a symbolic attempt to draw attention to the daily hardships of women, Sankara instituted a day of solidarity: men were encouraged to go to the market, handle household duties and prepare family meals so that they could experience what women faced daily.

“He who feeds you, controls you”

At a time when many African governments behaved like supplicants eager to do anything to attract Western financing, the Burkinabè government focused on national priorities. If Western donor agencies were willing to help finance national programs, they were welcome to do so. However, foreign aid was viewed as support and no longer the determining factor in the construction of the national economy. Much of that aid was tied to specific projects, over which the donors had considerable decision-making authority. The finance minister during Sankara’s presidency tried to persuade the president to ask for assistance from the IMF multiple times, but the leader declined on the grounds that IMF’s conditionality clauses would bring about the end of the popular revolution by shifting decisions over basic economic policy away from Burkinabè and toward an external entity. “He who feeds you, controls you,” he famously proclaimed.

“When people stand up, imperialism trembles”

On the world stage, Sankara championed genuine pan-African unity and the principles of the then- existing Organization of the African Unity (OAU, today the African Union). However, this was not to be achieved by an occasional common declaration issued at a summit meeting, but through action of African governments. This approach won Burkina Faso new friends in far-flung places and raised its global statue well beyond the country’s small size and economic power. New aid agreements were signed with the Netherlands, Japan and Canada. China also provided an interest-free loan for agricultural development. The general goal was to achieve greater autonomy from France, Burkina Faso’s former colonizer.

“While revolutionaries as individuals can be murdered, you cannot kill ideas”

However, not everyone admired the ambitious young president. Feudal lords resented that he had redistributed their lands. There were reports of political opponents being tortured and imprisoned without trial. In October 1987, Sankara’s revolution came to end when he was murdered in a coup d’état led by Blaise Compaoré, once his closest friend, minister of government and member of Sankara’s jazz band. Some see the coup d’état as the bloody end of a personal feud. Others believe that, besides Compaoré’s support from powerful conservatives in Burkinabè society, the coup was backed by Côte d’Ivoire, and perhaps by France.

After seizing power, Compaoré overturned most of Sankara’s radical reforms. Burkina Faso once again became an obedient client of the World Bank and the IMF’s development programs—aid that Sankara had eschewed in his pursuit of self-reliance. Comparoé held onto the presidency for more than two decades until 2014 when he was forced to resign following popular protests during the “Burkinabè Uprising,” an event largely inspired by Sankara’s legacy.

But the story of Thomas Sankara doesn’t quite end there.

The Long Search for Truth

More than three decades after the murder of Burkina Faso’s revolutionary leader, the landmark trial on his assassination began in October 2021. The main defendant, former president Blaise Compaoré, who currently lives in exile in Côte d’Ivoire, is being tried in absentia. On February 8, 2022, the prosecution asked to find Compaoré guilty and although Burkina Faso and Côte d’Ivoire have an extradition agreement, it remains unclear whether Compaoré would actually be extradited if found guilty.

Despite several clues pointing to the potential involvement of Côte d’Ivoire or France in the killing of Sankara, the investigating judge has been unable to gather sufficient evidence. France in particular has not provided all the declassified archives that had been promised. The trial was interrupted in January 2022 after a military junta dissolved the government and parliament and suspended the constitution. Mutinous soldiers overthrew Compaoré’s elected successor, Roch Marc Christian Kaboré, amid rising public anger at his failure to counteract a jihadist insurgency. In March 2022, while writing this article, the trial is in its final stages.

The military junta appointed Paul-Henri Sandaogo Damiba as the interim President of the country on February 14, 2022. While he has promised a transition to a civil government and restored the constitution, the country remains in political turmoil and the international community has condemned the coup. The revolutionary Sankara very much scripted his own epitaph: “You cannot carry out fundamental change without a certain amount of madness. I want to be one of those madmen. We must dare to invent the future.” Although his life and presidency were cut short, Thomas Sankara’s legacy remains compelling to many Africans today because he dared. His trial may finally bring to light some truths that will allow the country to pick up and move on from the past.

The Kazakhstan Riots: Orientalism and Power in the Heart of Asia