Home International Affairs Keeping up with Kemp: An Interview with One of Europe’s Key Cooperators 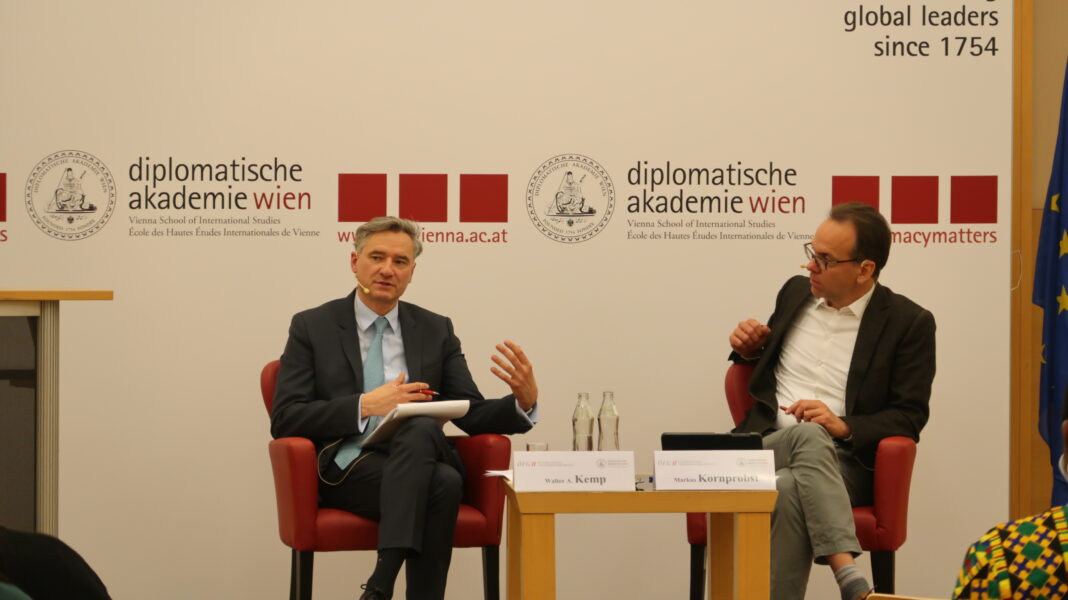 Throughout most of our education here at the DA, we have learned about the pillars of international law and geopolitics, attempting to understand the complicated ties that hold the international state system together. Two courses that exemplify this are perhaps not the ones you would expect – Professor Walter Kemp’s Transnational Organized Crime and Cooperation and Trust. Each of these classes emphasizes how important cooperation is between states in pursuit of a common goal, and dives into the mechanisms that have (un) successfully fostered cooperation. When compiling the reading list for his Cooperation and Trust class, Professor Kemp came across a problem – there was no textbook to use.

In the past few weeks, we have witnessed an unprecedented shift in the world order that many of us have studied and taken for granted. European Union Member States have moved in concert to support a state in the midst of a live-streamed conflict. As this order shows its teeth (or lack thereof) Polemics Magazine sent journalist-at-large Rory Hughes to sit down with Professor Kemp and discuss current events, the future of security in Europe, and his new book “Security Through Cooperation: To the Same End,” and to ask if cooperative security is still relevant with regards to the war in Ukraine.

Rory Hughes: Professor, it’s a pleasure to finally meet you in person after a long-time online! Let’s dive into why we’re here – what inspired you to write this book?

Walter Kemp: I was fortunate enough to grow up in a golden age for cooperation – or at least the hope it could deliver. I then started teaching at the Diplomatic Academy and realised that there was no course on cooperation – which is strange for a school for diplomats. I spoke with Markus Kornprobst and we decided that a course should be created. However, when I was preparing the syllabus, I discovered there were almost no books on the topic. In the absence of a textbook, I thought I would write one myself.

RH: We love the title. But can you explain the sub-title “To the Same End”? Is it a pun?

WK: It’s a double meaning. On the one hand the definition of cooperation is the action or process of working together to the same end. However, if we don’t work together, we will meet the same end as a species.

RH: How long did the book take you to complete?

WK: A little over a year. Many people picked up hobbies throughout lockdown, and I guess mine was finally sitting down and writing this book. It was very much to do with my frustration with the lack of cooperation in the international system at a time when we need it the most. I also wanted to write the book for my course at the DA, I wanted to keep myself busy during lockdown, and being a hypochondriac, I thought that I should write it quickly because of COVID! It is also nice to hold in my hand something that is my view of the world, and a way of sharing my own thoughts and experiences. As a speech writer, you are always that guy behind someone else. You may spend days on a text, but it is delivered in moments and sometimes that delivery changes your words and work. With this book I am the singer and the songwriter for a change. I feel that it is a “Made at the DA” product: it was inspired by my courses and students at the DA and will be launched here as well.

RH: What initially brought you to the Diplomatic Academy?

WK: I had been working at the International Peace Institute and knew Markus Kornprobst and after some discussion we decided that a course on transnational organised crime would be a great fit. I had been working as a speechwriter at the time and truly missed the academic sphere — sharing my knowledge, debating and learning not just for myself but also from my students. I had also spent time working in the Latvian Foreign Ministry (Professor Kemp is half-Latvian), the OSCE, and the UNODC. Throughout these roles I had learned a lot behind the scenes, and I wanted to share these experiences with students.

RH: Professor, if you could whittle down your book to three key takeaways, what would you choose?

WK: The first keyword is reciprocity. It keeps turning up in the book. Do unto others as you would have others do to you. There is a reason that this expression was at the heart of so many religions around the world. As a species we must have discovered through trial and error that reciprocity was in our self-interest for survival. The second point is related to this, namely that cooperation is a key to our success as a species. It is not the most aggressive species that survive, it is those that can work together. We have so much to learn from the animal kingdom when it comes to cooperation and conflict. For example, with certain species (you will have to read the book to learn which ones), when alpha males become too aggressive, they can become a liability to the tribe and are ostracized, even killed. Third, I was fascinated to learn about the impact of technology on cooperation. Will things like artificial intelligence lead to more rational and peaceful interactions, or when humans are no longer in charge will there be new dangers? If you can combine emotions with the cleverness of machines then maybe there is hope, but if machine learning remains statistical and clinical, I think that sends us down a very rocky road.

RH: Professor, we have all seen the atrocious acts of violence occurring in Ukraine. Do you still believe that cooperation and trust can be used as an effective method of de-escalation?

WK: Before I address that question, I want to make two things clear; firstly, the current situation in Ukraine demonstrates a true failure of cooperation and the functioning of the current international order and, secondly, there is a key difference between cooperation and appeasement. Game theory, for example Robert Axelrod’s “TIT-FOR-TAT” computer program, shows that if you cooperate first and this is not reciprocated, you must do the same move back. You shouldn’t turn the other cheek, rather you have to slap the other guy back. Otherwise, you will be taken advantage of.

RH: What do you think will happen to the OSCE? Does it have a future in its current format, especially given the now blatant failure of the Minsk Agreements?

RH: Is now really a time to publish a book on security and co-operation?

WK: Yes. Europe surprised me with the speed and unity in their response. We have seen Switzerland, Finland and Sweden brush off neutrality. Hungary and Germany have swiftly changed their stances within the EU. All of this highlights how cooperation has worked within the West, but it still has a way to go with Russia. However, there comes a point where you can’t keep slapping each other, whether it is a trade war or a shooting war. At some point both sides will realize the self-interest in working together. That day will also come in relations between Russia and Ukraine, and more broadly relations between Russia and the West. You can’t choose your neighbors. While we are witnessing a failure of cooperation, states are going to have to learn to work together – or at least co-exist peacefully – in order to deal with the threats and challenges that we will face as a species.

Walter Kemp is a Director of the Global Strategy against Transnational Organized Crime at The Global Initiative against Transnational Organized Crime and teaches at the Diplomatic Academy of Vienna. He has previously worked in a number of senior positions at the OSCE, served as Vice-President of the International Peace Institute and has been Speechwriter and Spokesman for the UNODC. His new book ‘Security Through Cooperation: To the Same End’ is out now and is part of the Routledge New Diplomacy Studies Series.