Home International Affairs One Year of Moonshine: Bringing Hope in a Turbulent Era 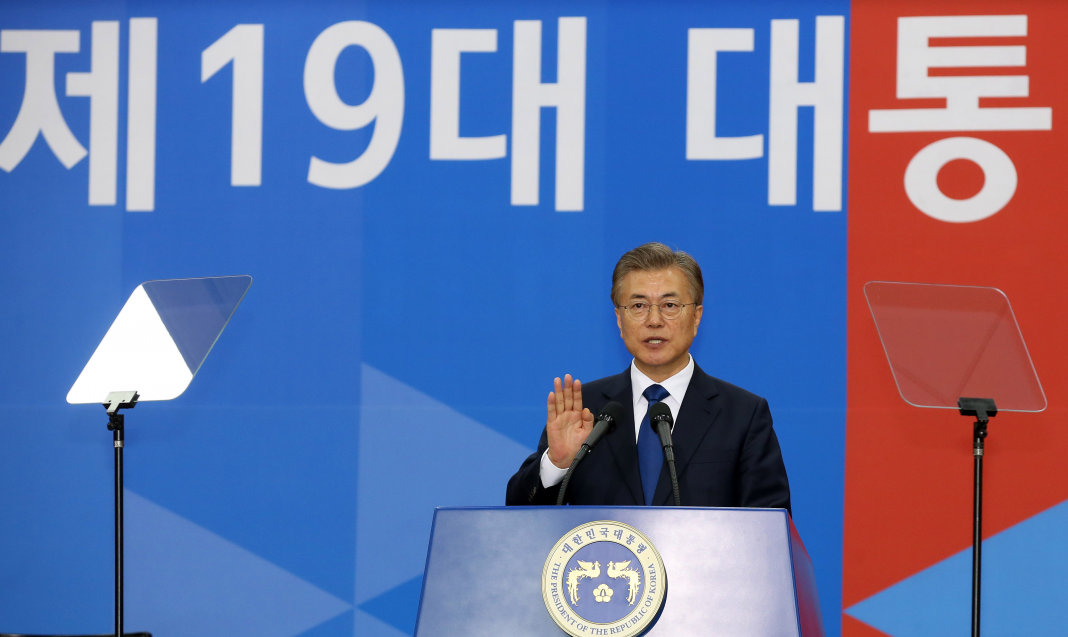 The president of South Korea, Moon Jae-in, has been instrumental in facilitating what may become a great step forward towards détente on the Korean Peninsula. But while Mr. Moon’s diplomatic efforts to manage the North Korean crisis have been tremendous, they have gone largely unnoticed.

Historically, South Korea has been in the political spotlight mostly due to nuclear weapons crises. It has been viewed as a minor player in the region, especially when compared to great powers like Russia, China, Japan, and the United States.

It was Pyongyang’s behaviour that put South Korea on the political map as the peninsula attracted international attention in the 90s when North Korea became a nuclear power.

The North Korean government became infamous for its repeated threats to turn Seoul into a “sea of fire”, and the U.S. mainland into a “theatre of nuclear war” after conducting its first tests in 2006. Ever since, Pyongyang has put leaders around the world on edge due to its nuclear blackmailing strategies and unpredictability.

And South Korea still remains in the shadow of its northern brother, despite its rags-to-riches success story: in the span of three decades, it leapt from the 125th to 11th place of the richest economies in the world.

The North Korean nuclear programme has been a headache for South Korea across more than two decades. Mr. Moon’s predecessors failed to stop the nuclear development efforts. In the 1990s, two liberal presidents, Kim Dae-jung and Roh Moo-hyun, attempted to engage the North with the so-called “Sunshine Policy”. The idea was that the South would provide help to Pyongyang with no strings attached, which would in turn alleviate North Korean national security concerns and eventually lead to denuclearisation.

The South Korean president now has the opportunity to demonstrate his country’s soft power and diplomatic skills by setting the scene for what promises to be an extremely complicated diplomatic deal. And so far, he has been rather successful.

At the start of his term in office, many observers viewed Mr. Moon as the apprentice of the liberal ex-president Roh Moo-hyun. Just like under Mr. Roh, Koreans expected Mr. Moon to continue the liberal Sunshine Policy line, as he showed more willingness to negotiate with the North than his conservative predecessors.

Experts, however, expressed scepticism about Mr. Moon’s efforts, stating that the belligerent attitude of President Trump  would ruin any reconciliatory efforts of the South.

And how, critics wondered, was a left-wing liberal like Moon to be expected to get along with Mr. Trump?

In fact, none of these pessimistic predictions transpired into reality. Moon found an effective way to deal with Trump through flattery and expressing gratitude toward the United States in the inter-Korean negotiations, even going so far as to suggest Trump should win the Nobel Peace Prize instead of Moon.

But South Korea’s policy toward its northern neighbour has been less clear. Although South Korea tried in the past to approach the North, it did not shy away from supporting international sanctions against Pyongyang after a nuclear test was conducted in 2017. Mr. Moon claims that his government is pursuing a policy of simultaneous maximum pressure and engagement, in contrast to Trump, who was considering military options.

Uncertainty concerning whether the United States was in fact serious about its military threats left North Korea less willing to cross a red line, erring on the side of caution. Instead, North Korea started negotiations to ease military tensions.

North Korea sceptics, such as the current Japanese government, question the results of these negotiations. An inter-Korean summit hosted by Mr. Moon in April 2018 became a political theatre of symbolism, with the two Korean leaders smiling at cameras and exchanging hugs and handshakes. The summit did not result in any practical outcomes but this was no surprise, as the goal of this meeting was different.

By pulling diplomatic strings, Mr. Moon has created an important negotiating platform for the upcoming summit between Mr. Trump and Mr. Kim. Denuclearisation, a Korean peace treaty, and a non-aggression pact will be on the agenda, as South Koreans are negotiating with the North on behalf of the U.S.

If Mr. Moon, who enjoys unprecedented levels of support at home, succeeds in bringing peace and stability to the region, his name will be remembered in the history books. When asked about his nomination for the 2018 Nobel Peace Prize, Mr. Moon humbly stated that he is not seeking international recognition. Instead, he once again stressed the role of the U.S. president in negotiations.

Progress in Korean negotiations, though historic itself, is also essential for the fate of other frozen conflicts across the globe, such as China versus Taiwan or Moldova against Transnistria. But, as negotiations between Trump and Kim will undoubtedly be in the spotlight, let us not forget the humble leader who managed to reconcile two men who toyed with threats of nuclear war against each other just a year ago.

If the South Korean president manages to turn the tide for these negotiations, it will give hope not only to the Korean peninsula, but also to millions of people worldwide. As Mr. Moon still has four years of office ahead, he will undoubtedly face new challenges. The first year of ‘Moonshine Policies’, however, has been a major success and provides an inkling of hope for what is to come.