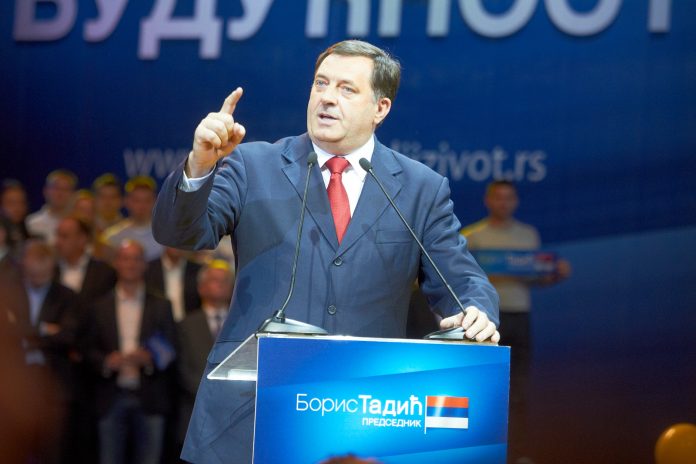 At a party conference in 2015 the President of the tiny Republika Srpska (RS) announced a referendum on the independence of this Bosnian entity. Scheduled for 2018, the referendum has the potential of again stirring up conflict not only in the country itself, but also in the entire Western Balkan region. The fear that this was more than an empty political phrase was confirmed in September 2016 by an illegal referendum there concerning an official holiday. The pivotal question is whether a referendum on independence and a possible secession of the Republika Srpska from Bosnia and Herzegovina would be in accordance with international law.

The President of the RS, Milorad Dodik, is convinced of this claim: “Republika Srpska is a state,” he said after the illegal referendum on the entity holiday. “I have learned that there are three main criteria to call something a state, namely territory, effective government and a population that wants a state. What is missing in the Republika Srpska? Nothing,” added the demagogic bosnian-serb politician. The constitutional court of Bosnia and Herzegovina declared not only the disputed official holiday but also the referendum of the RS illegal. The political leadership of this Bosnian entity seems unaware that with every step towards a possible secession it is actually digging its own grave in legal terms. To understand, one must look at the history of this entity.

The RS was proclaimed on 9th of January 1992 as the “Republic of the Serb People of Bosnia and Herzegovina“ by an illegally formed Serb faction of the Bosnian Parliament under their founder and president and now accused war criminal Radovan Karadzic. When the Republic of Bosnia and Herzegovina, which is the legal predecessor of the current Bosnian state, was internationally recognized as an independent and sovereign state in April 1992 the Serbian aggression against the young country commenced. The Bosnian constitutional court ruled on 8th of October 1992 that the self-proclamation of the so-called Republika Srpska was illegal and therefore null and void. Until 1995 the legitimate and internationally recognized government of the Republic of Bosnia and Herzegovina was at war with the RS-regime of Radovan Karadzic, which was backed by the Federal Republic of Yugoslavia (later Serbia) under Slobodan Milosevic. During the Bosnian War massive war crimes were committed, including ethnic cleansing and even genocide on the territory of the RS against the non-Serb population, particularly against Bosniaks. In November 1995, under considerable pressure of the international community, the Dayton Peace Agreement was signed which recognized the RS as one of two entities, the other one being the Federation of Bosnia and Herzegovina, within the independent and sovereign Bosnian State. 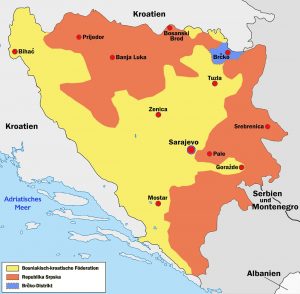 The Dayton Agreement emphasizes the sovereignty and territorial integrity of Bosnia and Herzegovina (BiH) and leaves no room for a possible secession of one of its entities. This was also confirmed by the High Representative for Bosnia and Herzegovina, who not only oversees the implementation of the Dayton Peace Agreement, but also acts as the final interpreter of the same, by stating that “the entities have no right to secede from Bosnia and Herzegovina”. If we take a sober look from a legal point of view it seems that quite the contrary is the case. The only legal document which mentions the entities as such for the first time in the history of BiH is actually the Dayton Agreement. Under all Bosnian Constitutions, whether as a constituent Republic of the Socialist Federal Republic of Yugoslavia or as an independent country, the concept of entities never existed. The current internal structure of BiH introduced by the Dayton Agreement is a purely ahistorical political construct based on the legalization of “ethnically cleaned” territories within the Bosnian State.

The only guarantor of the entities and therefore of the Republika Srpska as such is the Dayton Agreement itself. However, the legal existence of the Republic of BiH, which has no entities, never ceased to exist but was just “modified” by the Dayton agreement according to a constitutional provision adopted by the Bosnian Parliament two days before the official signing of the Dayton Peace Agreement in Paris on 14th of December 1995 . In case of a breach of the Dayton Peace Agreement, for example by holding an illegal referendum in one of its entities, this constitutional provision, if invoked, leads automatically to the annulment of the Dayton Agreement and the re-activation of the Constitution of the Republic of BiH which has no entity structure. In simple terms, this means that the aspirations of the political elite in the Republika Srpska towards independence will inevitably result in the exact opposite, namely the dissolution of the entities and therefore also of the RS. The first step in this direction was taken with the holding of an illegal referendum in the RS on the 25th of September 2016.

There is even another aspect which not only opposes the idea of the RS becoming independent, but even questions the legality of the fundament of the entity-based structure of BiH, namely the Dayton Peace Agreement. Article 53 of the Vienna Convention on the Law of Treaties (VCLT) clearly states that an international treaty which, at the time of its conclusion, conflicts with a jus cogens norm is void. Bosnia became a party to the VCLT on 1st of September 1993, but even if not it would still be bound by it, because a vast majority of the provisions in the VCLT can be seen as a mere codification of Customary International Law. Even though the content of jus cogens norms is sometimes disputed, it is undeniable that the prohibition of genocide represents such a norm. In 2007 the International Court of Justice (ICJ) ruled that the murder of more than 8000 boys and men by the military and police forces of the Republika Srpska in the city of Srebrenica in Eastern Bosnia (now part of the RS) on 11th July 1995 constituted genocide. Following this logic the conclusion of the Dayton Agreement, which is an international treaty, in which ethnic cleansing and genocide were accepted and legalized with the creation of the RS must therefore, according to Article 53 of the VCLT, be void.

A referendum on independence by the Republika Srpska would not only plunge Bosnia and the region into a new conflict but it would also mean the end of the Dayton Peace Agreement, the only document which gives the RS a(n) (il)legal foundation. It seems therefore that the dream of a possible secession can turn very quickly into a nightmare for the smaller Bosnian entity called Republika Srpska.