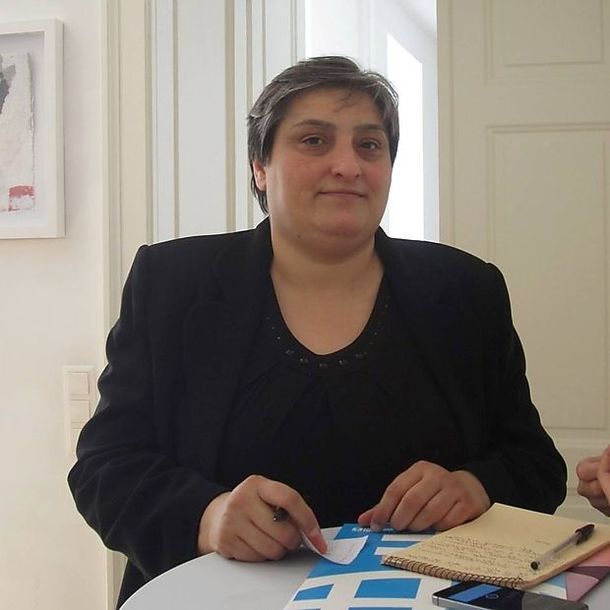 Majdoleen Hassan is a Syrian lawyer and Human Rights activist. She is part of the Women’s advisory Board to the UN Envoy for Syria. Being arrested twice, she had to leave Syria in 2015 and is currently staying in Austria. The interview took place on November 20, 2016 in Vienna.

Polemics: You were working as a lawyer and Human Rights activist in Syria. What were the biggest obstacles you faced during your work?

Majdoleen Hassan: It is very dangerous to work as a Human rights lawyer in Syria and it is very likely that you end up in prison. I was defending prisoners of conscience before the court. This bothered the regime and they had me arrested. A lot of lawyers aren’t allowed to travel outside the country and are under constant surveillance. They also erase most Human rights lawyers from the Lawyers Association list, which means that they are not allowed to work as a lawyer any longer. You cannot practice law in Syria, if you are not part of the association. It is also very unusual for women to work in this field. There are a lot of stereotypes against them. So basically I had two problems, being a Human rights lawyer and being a woman.

Polemics: What made you leave the country?

Majdoleen Hassan: We didn’t want to leave Syria. We stayed in Syria as long as we could, until 2015. They arrested me and my husband twice. So we couldn’t stay any longer and had to leave for Lebanon. After one year in Lebanon, one of the parties related to the regime and to the Hezbollah told us that we would have been killed if we had stayed in the country. When we came back from Geneva, they already waited for us at the airport and investigated us. When we came to our house, our neighbours told us that they were looking for us. So we had to leave and went to Austria.

Polemics: You are part of the Women Advisory Board under Staffan de Mistura. Why is there still a massive underrepresentation of women in peace negotiations?

Majdoleen Hassan: That’s a good question. There are some women, but they are very few and they are not really involved in decision-making. Most of them also do not represent the demands and needs for women. The most important aim for us is to implement the Resolution 1325 (note: Res. 1325 not only addresses the impact of war on women but also their pivotal role in conflict resolution and sustainable peace). We are 12 women from all over Syria and from different ethnic groups. We work as a Women Advisory Board to support gender issues along the negotiations. We ask for the representation of women in the negotiations on all levels. It is very important to stress the point that women have to be represented at all levels. They should not only be present, but also have an impact. We have experienced that any peace process in which women are not involved, has a very negative impact for the future.

Polemics: Why is it so important to especially support women?

Majdoleen Hassan: The ones who suffer the most are women. They are the ones bearing the brunt. So they are also the ones wanting an end of this war the most. The ones who lose the most are also the ones who know best how peace can be achieved. In addition, the role of women has changed through the war. Before the war, women were usually bound to housework. But now most of the men are gone – they are arrested, leave the country or have to fight. Women now have the possibility to be decision-makers.

Polemics: What measures need to be taken to improve the situation for Syrian Refugees and to ensure the safety of women?

Majdoleen Hassan: The refugees aren’t the problem. The problem is the war. It is a problem of the whole international community. The responsibility is not only to receive and welcome refugees. Every day people get killed. Every day Syrians die. Every day there is a battle. The International Community should stop funding the weapon economy that had emerged in Syria during the past years. The solution for the big refugee crisis in the EU is to stop the war!

Polemics: What are the most essential actions that should be taken by the International Community?

Majdoleen Hassan: Stop to support the militias, the regime, the Islamic groups and stop the war! They are continuously supporting the conflict parties. Put pressure on the regime to release the people that are in prison. Bans just hit the civil society of Syria, not the regime. The regime already has allies and sub-channels. They have no problem to find new sources. But the civil society doesn’t. The EU Community should stand up and support its ethics regarding Human rights and democracy. The International Community should put pressure on all parties to go back to the negotiation table and launch a political solution for democracy!