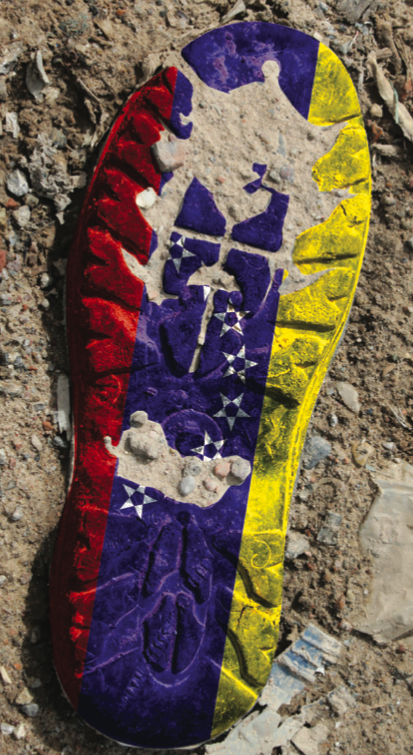 The author has worked and lived in Venezuela during the current crisis, and later along the refugee route in Colombia. Working, walking and hitchhiking with the internally displaced persons (IDPs) and refugees provided firsthand contact with the community. This tale of caminantes consists of unheard stories that would otherwise be lost, and wishes to portray the struggle of the Venezuelan people.

Venezuela: a country that pervades current newspaper headlines. Innumerous articles have been written about its economy, oil, politics, unrest and enduring crisis. On the ground, even though war and conflict have not yet exploded, the country goes through one of the worst humanitarian crises of this century.

A country that once thrived, and within an underdeveloped continent, once was a positive example to its neighbors. Before the crisis Venezuelans did not pay for housing, healthcare, or education and their energy resources – predominantly oil and gas – were abundant and cheap. The people had one of the strongest worker-oriented labour policies in the region: 30-hour work weeks with countless benefits and rights. The Bolivarian-socialist agenda thrived for years, and yet, the country’s economy and welfare policies were built solely on oil trade prices and were controlled by a corrupt government. Since the beginning of the 2010s the country faced its economic and political downfall.

It is estimated that the number of Venezuelans in countries across Latin America rose from 700,000 in 2015 to over three million in November 2018. Additionally, the total estimated number of Venezuelan expatriates in the region is likely to increase further, as data sources rarely account for Venezuelans without regular status. For decades, countries in Latin America and the Caribbean have pioneered and made fundamental contributions to the pursuit of protection for refugees and migrants. However, with more than 5,000 daily arrivals, national capacities and host communities are overstretched, leading to increased risks of xenophobia and lack of relief and shelter in the host communities.

Perhaps even more significant is the humanitarian factor of the crisis. The story of a part of the people of Venezuela are a strong and resilient group of people who were forced to leave their homes to face neglect, xenophobia, hunger, sometimes death and to walk through treacherous paths craving a better life: a group known as the Caminantes.

This quotation translates to “Wanderer, the footprints you left behind are the road and nothing else.” With these words, Antonio Machado lyrically describes the ways of the Wanderer: a poetic figure whose path and future are uncertain.

In the Venezuelan crisis, Caminantes are the asylum seekers, migrants and refugees who fled the country through Colombia. Among them are the poorest families of the country, the most vulnerable and marginalized communities, as well as highly educated middle class families who have lost their jobs and homes. Their salaries were eroded by inflation and are equivalent to 3$ per month – while the price for 1 kg of flour is $2 – and they are being persecuted for their political beliefs by a totalitarian regime that clings to power long after its expiration date.

Caminantes, as the name translates to walkers, are wanderers. They are families, individuals, children, men and women who gather their most precious belongings, fit them into a backpack and start their sagas walking, sometimes barefoot, across South American borders. Some families start in Caracas, cross the border at the Colombian city of Cucuta and continue their journeys ahead, facing the Sisyphean struggle for food,  shelter, a job and ultimately walking up to 5,000 km to find a place to call home.

‘Whilst walking, the path comes to be, and when looking back

he sees the road he will never step upon again.’

The Caminante phenomenon originated in Colombia and spread indirectly to Peru, Ecuador and neighbouring countries. The route they walk goes from Caracas to Bogotá, and can reach as far as Lima and Montevideo; it is the refugee route. In Brazil, in contrast, the figure of the Caminante is not so present, as the government provides voluntary aerial relocation programmes to resettle families throughout the country, reducing the number of families having to walk.

Colombia is normally the first country where families arrive, however, there is almost no government support in the area, no refugee camps, nor a systematic, structured response plan to support them. For the last 2 years, a seemingly endless flow of humans has been crossing the border, regularly bearing documents through the official border and also irregularly through the so-called tronchas – makeshift unstable bridges built over the river between the countries – where human traffickers and smugglers reign.

The Colombian government fails to support the Caminantes, as it also fails to provide even basic needs to the local refugios. Refugios, or refuges, are NGOs or private houses situated along the refugee route that aim to provide relief to the Caminantes, however, they are constantly overcrowded and lack basic resources and infrastructure.

The refugios are often small family houses, run by two to three persons who have to prepare some 2,000 meals per day, can fit around 300 individuals under one roof for no more than one night and provide the Caminantes with information about the path ahead: details about the next refugios, and suggestions to avoid accidents, hypothermia or starvation along the route. All of this on a 24/7 basis.

These shelters are supported by the scarce savings of the local community and the few active humanitarian agencies in the area, providing ingredients, infrastructure and medical supplies. These humanitarian agencies, however, all act on a crisis response basis and can only provide relief for a limited amount of months and sometimes weeks.

In short, the Caminantes are forced to keep moving, pushed by the limited vacancies and constant flow of new arrivals of local refugios. On top of that, these aren’t always active due to the lack of resources, the abandonment by the local government, thus pushing the Caminantes to follow their paths to uncertain destinations. These families, left alone on a perilous journey, would realize that their unlaid paths would come to be only by walking further; that their future, their journey, depended solely on their ability to walk to the unknown. As Machado has written: Caminante, no hay camino, se hace camino al andar, which translates to “Wanderer (walker), there is no way, make your way by going farther.”