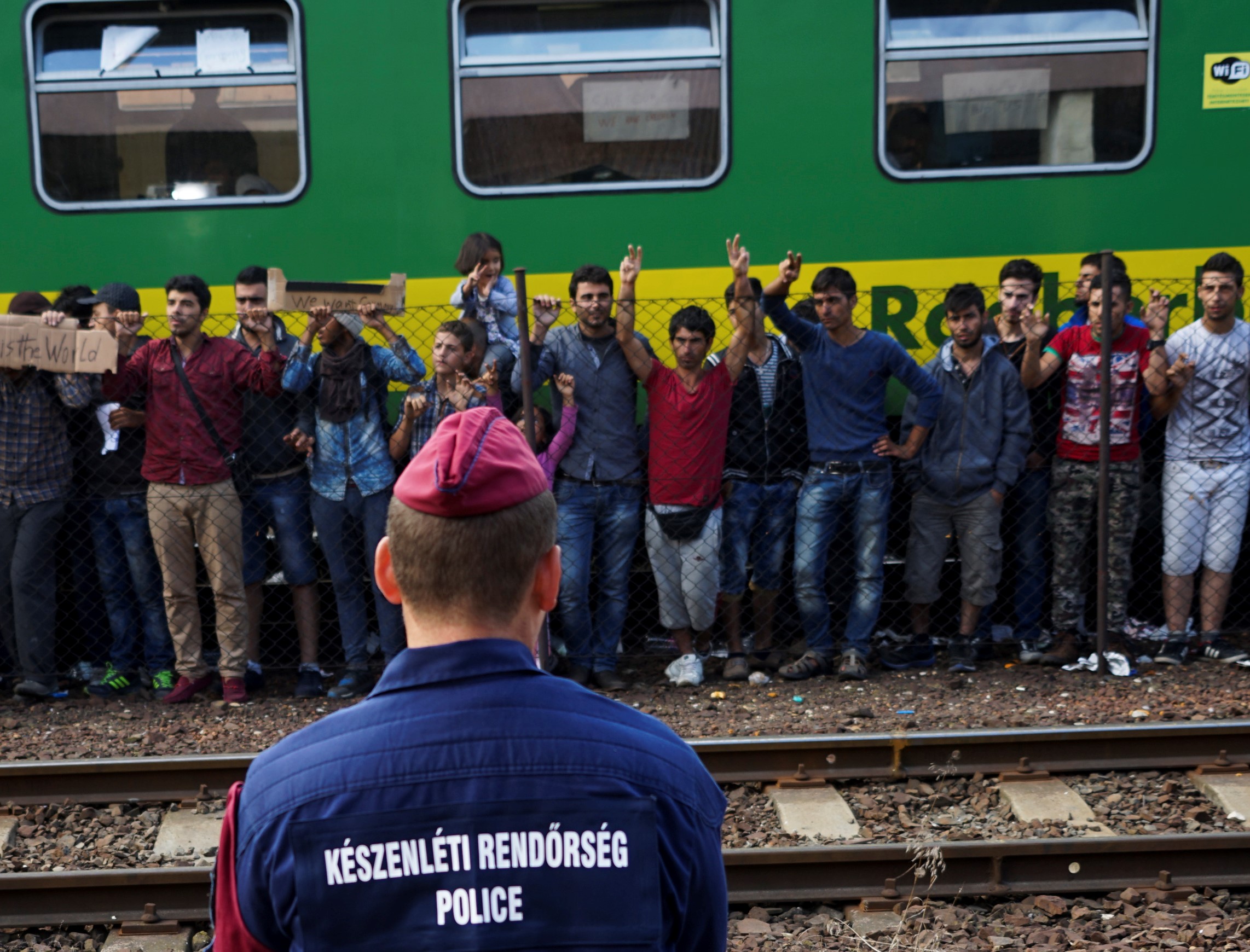 Once every term, the Debating Society of the Diplomatic Academy hosts a debate night. In British parliamentary tradition, eight debaters take the stage and discuss the hot and poignant topics of our time in teams of four. The last topic was a timely suggestion: „This House Believes in the free movement of refugees.“ Zsofia Hidas asked for the students‘ opinions.

“Yes, nobody could foresee the scale of current refugee movements. Yes, a common European asylum system based on solidarity is what would be needed. And yes, we cannot take in the entire male population of Nigeria. Yes again, when it comes to the need to differentiate between those fleeing from immediate threats to their lives and those fleeing economic hopelessness. While we seem to know all these things, we are still somehow too paralyzed (and fearful?) to rethink our role in this mess. Maybe a different angle helps: We are in an emergency situation in which our immediate task is to offer people a safe haven. What is a safe haven? It is temporary in nature. Most of the people fleeing want a restoration of normality, a preservation of their communities and autonomy. There will be a post-conflict Syria one day. This Syria will need strong and committed returners. What’s a sustainable and holistic approach to refugees? Can we develop a new self-conception in which our societies help and receive now to equip and empower the people to return in the future? Instead of only bringing refugees to a few countries, let’s bring opportunities and jobs to refugees.”

“The general discourse seems to completely sidestep the reasons we are even having this discussion about the free movement of refugees in the first place. It’s no coincidence that the majority of refugees come from countries and regions which have been destabilized by the actions and interventionist foreign policies of certain nations. Iraq, Libya, and Syria for example, prior to the violence and conflict which now plagues them, were relatively stable countries. Unfortunately, war and conflict have transformed them into hotbeds of sectarianism and terrorism. The solution is to stop intervening militarily in countries and creating the unlivable conditions which force people to seek better lives elsewhere. A foreign policy of peace and non-intervention could be part of the long-term solution. I also think that European countries will have to reform the generous welfare state serving as a tremendous pull factor in bringing refugees and economic migrants to Europe.”

“In terms of migration and refugee crises we must realize two essential points. On the one hand, we have to stick to international humanitarian law, by not violating the right of people for asylum and trying our best to save them from the horrors of war. On the other hand, we should not forget that this is also an issue of national security. In times of crisis, we must make sure that we distinguish between different terms. “Refugees”, “economic migrants” and – crucially – “criminals,“ such as terrorists pretending to be “refugees”.“

“The media often refer to all sorts of migrants as “refugees” or “asylum-seekers”. However, let us be careful. Not every asylum-seeker – and certainly not every migrant – is a refugee, and rights and obligations differ for each of these groups. Most importantly, only refugees within the narrow meaning of the 1951 Geneva Convention are entitled to the rights under this convention. Hence, in our debate about “refugees” we should be precise. Let us not fall prey to attempts to equate those foreigners in fear for their lives with “the foreigners,” as such. Words do matter.”

“Many of us have been deeply moved by the heartbreaking images of refugees over the past year. The refugee crisis completely shattered the Common European Asylum System and has put severe stress on the Schengen system. What we need now is a comprehensive plan that implements effective border control, installs necessary infrastructure into countries most affected by the influx of refugees, and makes sure that we, as an international community, put an end to the horrific practices of criminal gangs and human smugglers. Plainly speaking, allowing the free movement of people, in this case refugees, does not most efficiently deal with the serious underlying issues that lead to instances of such mass migration.”

“In political debates, refugees are often considered second rate beings. “We” do not want “them.” It is an attitude of being superior based on pure luck of having been born in the right place at the right time. It is an attitude of justifying the devaluation of the unknown other, by picturing them as a diffuse, malevolent threat. One argues that our culture and our values have to be protected. But which ones might those be? A culture that willingly lets thousands of people die? A culture of blind hatred? A culture that chooses which life is to be respected and which one is not?.”

“While the intentions of Europe and in particular Germany were well-meaning when taking in hundreds of thousands of migrants in a condensed period of time, the consequences of this hasty altruism had unfortunate political and social side effects. The generous treatment of the initial influx of asylum seekers, coupled with relaxed border controls, encouraged masses of other migrants to make the journey to Europe. The political and media crackdown on anti-migrant expression, along with this sudden wave of “others,” served to rekindle tribalist sentiment, and fan the flames of far-right populist movements. It seems evident that the European system in place was simply not designed to withstand this sudden influx of refugees, and that the backlash after this failure made it all the more likely that „real” refugees will have a harder time acquiring the services they need.”

“Refugees are people like everyone else, with no hidden agenda, and no intention of ruining your country. Sadly, the war has forced us to seek refuge and we are very grateful for your hospitality. My Syrian barber here always urges me to speak German, as being guests in this country who want to integrate, we must speak the language. Austria is our new home, and accordingly, we have duties just like we have rights, and the advancement and well-being of this country is our goal too. As a Christian who grew up with Syrian Muslims, I can tell you that they have nothing but utmost respect and admiration for us and our religion. I even visited a mosque where the sheikh emphasized how much both religions can learn from each other. So don’t fret and don’t be afraid of us – we come in peace.”