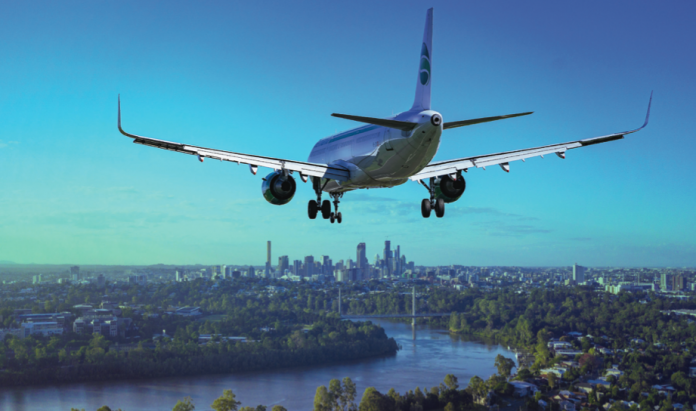 Greta Thunberg ignited worldwide interest this September for her emotionally charged speech denouncing international leaders for their passivity in combating climate change at the 2019 UN Climate Summit. The young Swede arrived in New York City for the event after crossing the Atlantic aboard an 18 meter racing yacht on a two-week, zero-emission sea voyage, adding her to an increasing number of climate activists who have ditched flying in favor of more eco-friendly modes of transportation. The concept of flygskam-a Swedish word which translates literally to “flight shame”-sparked an environmental movement that encourages boycotting commercial flying, as Reuters reports it accounts for about 2.5 percent of global carbon emissions. Perhaps you haven’t experienced flygskam personally, but you may remember the backlash Prince Harry and Meghan Markle received for taking a private jet to Sicily the same month.

So, flying now ranks among plastic drinking straws and air conditioning on the list of small, and in some cases, life-saving luxuries that have been demonized in the name of protecting the environment. It’s understandable-it’s impossible not to feel anxious when every week news outlets report on the destruction caused by record-breaking extreme weather. Powerful politicians continue to deny climate change, although scientists have warned us for decades about the catastrophic effects of global warming. Naturally, consumers feel increased pressure to curb their carbon footprint. Thunberg has become a lightning rod for criticism, largely because the “climate first” movement she champions inspires guilt for daily consumption habits. Shame, previously reserved for morally repugnant behavior, is now socially acceptable to direct at friends for flying to a client as part of earning a living, or colleagues for driving their children to the doctor.

Speaking of children, you should feel guilty about having them. According to a study published by two scientists from Oregon State University, the decision to reproduce adds a whopping 9,441 metric tonnes of CO2 to the lifetime carbon footprint of the average American parent. That’s significantly more greenhouse gases than the 1.1 metric tonnes emitted by a roundtrip flight from New York to London. For those who prefer pets to kids, let me draw attention to your pet’s “carbon pawprint.” Data collected by a 2013 study at Arizona State University indicates that a Labrador Retriever emits 1.6 metric tonnes of CO2 annually. If you’re not feeling guilty yet, recall the last time you turned the heat on in your home. The Department of Energy and Climate Change reports that heating the average British home emits 2.35 metric tonnes of CO2 per year. Climate shame logic casts the death of the planet on our conscience for utilising basic amenities such as home heating. Endeavours to experience genuine joy, such as raising a child or bonding with a pet, now imply moral irresponsibility.

The endless climate-guilt spiral only distracts from the fact that the choices of individuals are not to blame for climate change. One hundred companies are responsible for a staggering 71 percent of global greenhouse gas (GHG) emissions since 1988, according to a report published in 2017 by the Carbon Disclosure Project in partnership with the Climate Accountability Institute. The Chinese coal industry, guilty of producing 14.3 percent of global emissions between 1988 and 2015, leads the pack as the biggest offender. Closely behind are the Saudi Arabian Oil Company, Gazprom OAO, National Iranian Oil Co and Exxon Mobil, which in total amount to 12.7 percent of GHG emissions in the same period. How convenient for these coal and oil giants that we bicker over plastic straws and hesitate about the EasyJet flight home for Grammy’s birthday while they wreak havoc on the environment with no accountability. China burns coal like it’s 1960, yet flygskam and other environmental movements imply we should be ashamed for merely living our lives.

Governments have the power to hold international corporations that pollute the atmosphere accountable. It’s time they do. Last October, the State of New York launched a historic lawsuit against Exxon Mobil, alleging that the oil giant misled investors and the public about the dangers posed by climate change. Regardless of the outcome, this marked the beginning of a wave of litigation against the oil and gas industries. The Sabin Center for Climate Change Law reported more than 1,000 climate change lawsuits filed in the U.S. and an upward swing in climate litigation globally. Climate change lawsuits, once unique to the U.S., have now been filed in at least 28 countries, including Australia, Canada and Spain.

While the influence of consumers is formidable, it is negligible compared to the impact governments could make by pursuing green energy policies. For instance, India has adopted several pro-solar policies since 2010 and implemented programming to expand off-the-grid solar power, which has brought electricity to many villages for the first time. India is currently on track to exceed its Paris Climate Change Agreement pledge to provide 40 percent of its energy needs with non-fossil-fuel power by 2030, reports the Los Angeles Times. Governments should also legislate to maintain sustainable emissions standards. The United Kingdom, once the world’s largest coal consumer, announced in 2010 that it would phase out coal entirely by 2025. The U.K. boasts amazing progress: its share of electricity from coal was 40 percent in 2012 but only seven percent in 2017, according to data from the Powering Past Coal Alliance.

If you have given up flying, be proud. Now, inspire others to increase the pressure on governments to act. The bottom line is an individual’s decision not to make personal sacrifices for the environment that involve high social and psychological well-being costs is not morally repugnant. Demanding government commitment to invest in clean energy and championing politicians who propose ambitious climate change initiatives are the most effective actions for a greener future.