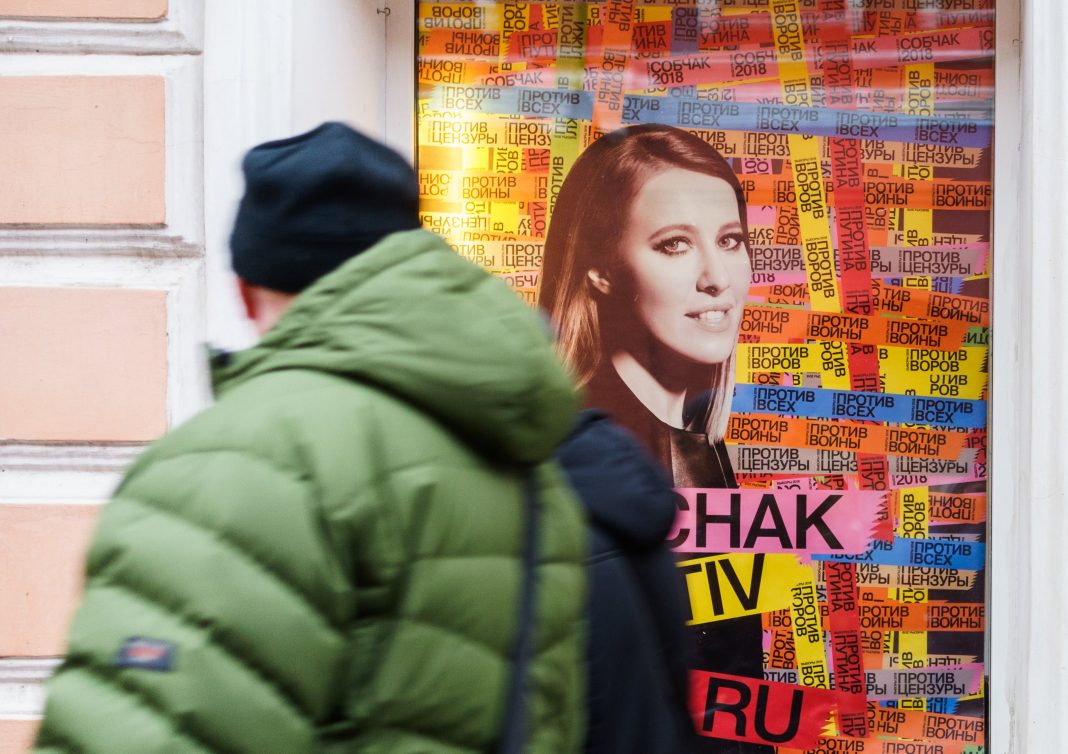 Ksenia Sobchak, aka. the Russian Paris Hilton, is now the official opposition candidate in the 2018 Russian presidential elections. Her surprise candidacy raises questions about her glitzy background, shaky legitimacy and shady aims. Is the It-Girl-turned-opposition-candidate as selfless as she claims to be?

Ksenia Sobchak was born in 1981 to two political heavyweights. Her mother, Liudmila Narusova, is a representative in the Council of the Russian Federation and her father, Anatoly Sobchak, co-wrote the Russian constitution before serving as mayor of St. Petersburg during the infamous crime-ridden nineties. Vladimir Putin made his entry into politics under the mentorship of Sobchak, and the current president states that “[Sobchak] played a big role in my destiny.”

After graduating from Moscow State Institute of International Relations (MGIMO), Sobchak promptly dove into the world of reality TV. In 2008 she earned her nickname by starring in Blond in Chocolate, an at-times even trashier version of Keeping Up with the Kardashians. Some highlights include her being carried home unconscious after a drunken night out and asking a man on live radio about his sexual fantasies.

Since 2011, Sobchak has reinvented herself as an opposition figure: she participated in the 2011-2013 Moscow protests on Bolotnaya Square that demanded fair elections. Sobchak also started her own political talk show on TV Rain, Russia’s only opposition channel. According to the show’s webpage, “the blonde in chocolate Ksenia has turned into a witty political analyst and a tenacious interviewer.” After having announced her presidential bid during a Hard Talk interview, Sobchak repeatedly claimed that her scandalous reality TV career “was fifteen years ago” and that since then, she had done journalism on an international level, mentioning her interview with the opposition figure Mikhail Khodorkovsky.

But in fact, Sobchak essentially remains an It-Girl, albeit no longer as wild as she once was. In the Hard Talk interview, Sobchak exaggerated her distance from showbiz – her worst debacles were only ten years ago, and she stopped hosting the Russian version of Big Brother a mere six years ago. She also conveniently forgot to mention that she is to this day the editor-in-chief of L’Officiel, a women’s magazine. The now presidential candidate still regularly posts photos of her fashion looks for her 5.4 million Instagram followers. It comes as no surprise that many Russians roll their eyes when her name is mentioned: some have said that she’s running for the media buzz, while others say she’s a Russian version of Trump and hipsters may cast an ironic vote or two.

If Sobchak is so unpopular – she herself openly admits that she carries “no political weight” –, then why is she even running? According to the candidate herself, it’s because Alexei Navalny, the opposition’s figurehead, has been barred from running by the current government due to bogus legal reasons. Navalny has called his supporters to boycott the elections. However, Sobchak argues that she provides an alternative for opposition voters: Sobchak claims that as a candidate, her aim is to mobilize votes for her non-party entity called Against All.

The more accurate translation of Against All is in fact None of the Above because the platform is named after the eponymous option that was available on Russian presidential ballots until its abolition in 2004. Sobchak claims that her candidacy has nothing to do with her as a candidate, which is why her lack of political credentials supposedly should not matter. Instead, it simply provides the opportunity for supporters of the opposition to express their discontent with the presidential elections by voting rather than by not turning up.

Sobchak has confirmed that if Navalny is allowed to run, she will step down immediately to rally behind him. But if she were fully supporting him, she would more likely have joined Navalny’s Progress Party to create a united front behind the more legitimate leader of the opposition. On Dec. 23, Sobchak joined the Citizen’s Initiative party and stated that she was in the presidential elections to win, so the selfless None of the Above argument seems weak.

According to the reputable Levada Center’s polls, Sobchak is credited with about one percent of voter intentions, and only two percent of the respondents would vote for Navalny. Only 24 percent, however, were sure that they would cast their ballot on March 18; hence, the polls are only significant to indicate that turnout will be low. Putin will most probably be re-elected at the end of the day. Nevertheless, the two feuding opposition candidates are galvanizing participants in these 2018 Russian elections. None of the Above may just be Ksenia Sobchak’s entry into the most grandiose TV show she has ever participated in.

Wasting Away: Bringing the Oceans’ Plastic Problem to the Climate Crisis...