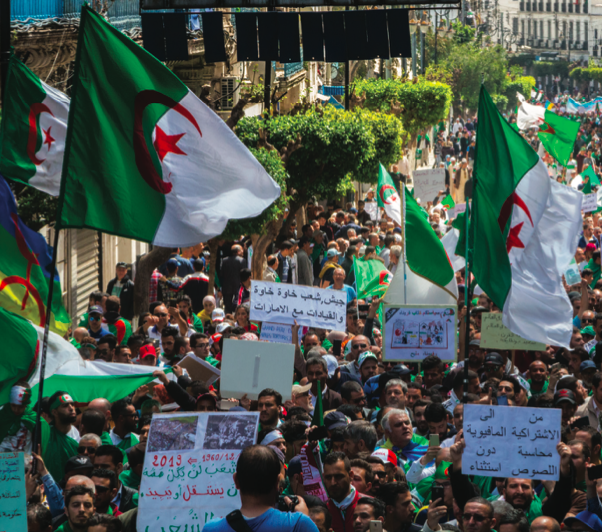 Ever since February 22, 2019, millions of Algerians have been relentlessly marching, calling for the fall of an authoritarian and corrupt junta, for the establishment of a constituent assembly and for the transition to a democratic system and the rule of law. Despite the peaceful, durable and joyous nature of these protests, they have received relatively little attention in the international media. There has also been little to no coverage in foreign policies regarding the Algerian and as an extension the Sudanese call for democracy. This is in dramatic contrast to the robust media coverage of the Hong Kong, Lebanese and Chilean ongoing revolts. Akram Belkaïd has thus coined the phrase as “the solitary struggle of the Algerians.” Why then do some revolutions matter more than others?

A comparative perspective on past transitions to democracy displays an evident dichotomy in how foreign policies and media coverage are conducted that not only explains the media isolation of the Algerian case today, but also delivers a metric to gauge the relationships between democratic Western countries and authoritarian regimes. Research directed by Stoner and McFaul from Stanford demonstrate that, during the so-called Third Wave of Democratization, international actors boosted “indigenous organization in successful transitions” through aid, promotion or coverage, while being paradoxically less involved in failed or aborted transitions.

While the Hong Kong protests are praised by international actors as a pressure point against the PRC, similar voices elsewhere are ignored or evoked with the greatest caution. Since the Algerians are also facing authoritarianism-arbitrary arrests, infringement of civil rights, restriction of freedom of press and disinformation campaigns-what explains the lack of coverage of their fight for democracy? As of today, only two actors expressed their support for the Algerian Hirak: The European Parliament Member Marie Aréna and Canada through Ambassador Patricia McCullagh. What have hindered other heads of state to position themselves regarding the Algerian revolution and how do they justify their silence?

The fallacious argument of stability
A systematic, haste-forward response resonates with foreign actors: One should not risk “stability.” According to French Foreign Minister Le-Drian, “Algeria is a sovereign country whose stability is essential.” Yet this argument, justified as a bulwark against risks such as economic crises or the rise of terrorism, appears to be spurious when projected against the cases of failed transitions. All the failed attempts of the 1980s presented in Stoner and McFaul’s book, except China, were dependent on oil revenues during their transition moments and the presence of oil may have altered the willingness of external actors to interfere and promote democracy, a sort of political “Dutch disease.”  As such, even when a transitioning country displays promising internal developments, external support appears to be a necessary-but not sufficient-condition for a successful transition. As during the Algerian protests of October 1988, external actors today-the “democratic West,” Russia and China – do not want to risk the stability of their oil and armament contracts and therefore do little to encourage democratization through diplomacy. Resorting today to the excuse of a stable rampart against Islamic fundamentalism, for example, grossly fails to take into account the reality of the positive development of civil society in Algeria and Sudan. Only a better understanding of the stakes-far removed from the redundant “risks” of extremism or migration-will lend credibility to international players’ interest in the country’s future stability.

The real allies are the people, not the juntas in place

As such, the positive externalities that these peaceful revolutions could offer to the “democratic West” remain to a large extent ignored. Even when scrutinized under the realist lens-no permanent friends or permanent enemies, only permanent interests-a support of democratic pleas can yield significant returns.

A RAND study shows that support focusing on building accountable institutions, improving financial oversight and instilling human rights norms instead of supporting militaristic regimes generates lower levels of political violence and government repression. Furthermore, by positioning themselves as proponents of democratic change in North Africa, the democratic Western countries could successfully make such regimes less attractive as a partner for countries such as Russia and China. The democratic development of these societies will provide a durable peace and diminish the number of collateral crises in the developed world, particularly within the EU, where the question of mass migration plagues policymakers and triggers the rise of populist rhetoric.

Moreover, supporting peaceful transitions for democracy abroad would significantly reduce the socioeconomic pressures in transitioning countries and, consequently, the incumbent domestic tensions in the developed ones. One could extrapolate the positive outcomes of direct support for democracy to an organic economic development and the strengthening of global policies since legitimate institutions tend to enforce policies durably. This could also allow for qualitative improvements to be fostered and stronger partnerships to be built centered around sustainable human development, international cooperation and scientific collaboration.

The diplomatic efforts of the “democratic West” have recently been tarnished by events such as the funding of Saudi’s war in Yemen and the deafening silence vis-à-vis the assassination of Khashoggi. We see repeated occurrences of governments bartering their dignity over contracts, constantly jostling between an advertised pseudo-liberalism and a practiced pseudo-realism under the guise of the eternal “that is the unfortunate way the world works” alibi. It is in the best interest of the “democratic West” to seize the opportunity to exemplify democratic values and stand dignified once again.

In this context, what can be offered? A vital step would be condemning police repression against peaceful demonstrators. Attention should also be paid to prosecuting corrupt companies, launching investigations regarding ill-gotten assets and repatriating stolen capital. Finally, it is imperative to prepare emergency economic aid so that peaceful demonstrators triumph in their legitimate call for democracy.

In the words of Thomas Serrès, the Algerians have done their part. The “democratic West” will either be solitary; or complicit.