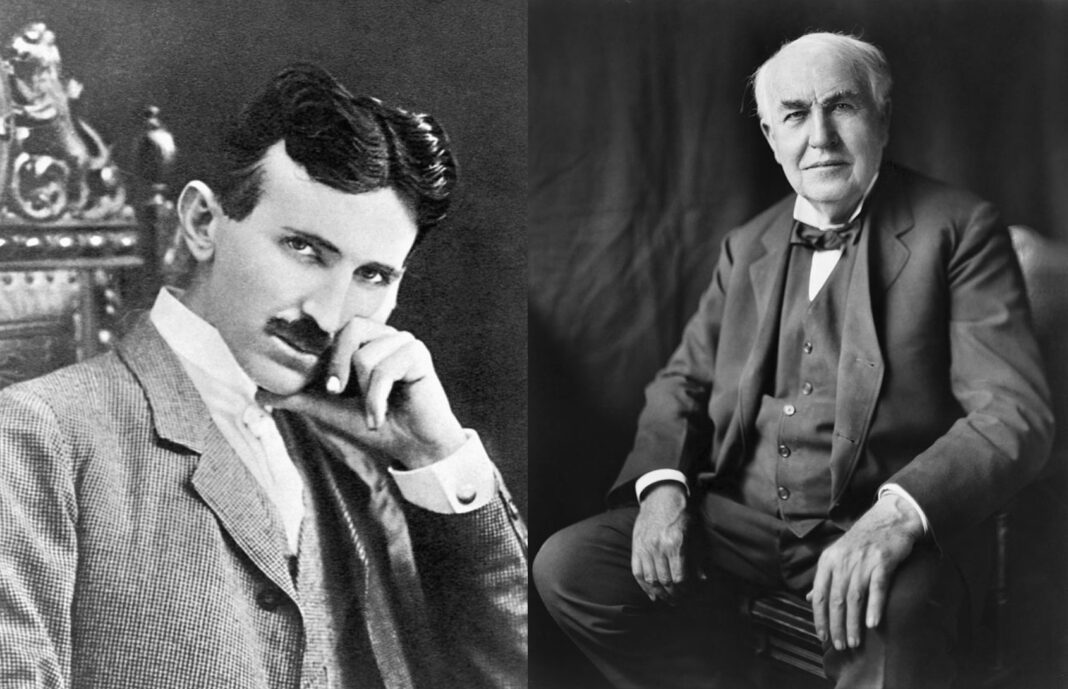 Picture this: Chicago, 1893. You are standing in the midst of the legendary World’s Fair, which this year is commemorating the 400th anniversary of Christopher Columbus’s arrival in the New World. The Fair, in its impressively grand neoclassical style, showcases the nation’s latest accomplishments in science, arts and architecture. In a demonstrative manner, US President Grover Cleveland pushes a button that instantaneously lights 100,000 lightbulbs – marking the exposition’s first illumination by means of electricity. Electricity is still a novel concept, with most people still relying on candlelight or oil lamps. Unaware of the historical significance of this moment, you are witnessing the culmination of a great scientific battle: the victory of Nikola Tesla’s (1856 – 1943) alternating current over Thomas Edison’s (1847 – 1931) direct current.

The 1893 Chicago Fair, a forerunner of this year’s Dubai Expo, was more than a mere amusement park displaying guns, locomotives and belly dancing. The event was to shape global electrification for decades to come. The Westinghouse Electric Corporation, which was using Tesla’s ideas and for which Tesla was working, underbid Edison General Electric and thus got clearance for using alternating current to power the Fair. Edison had planned to do the same using direct current, but ultimately lost the bid.

As a result, to this day, our electricity grids are based on the use of alternating current. Most power plants directly generate alternating current, because it is the most effective way of generating electrical energy from mechanical energy. Coal fired power plants, gas and steam turbine power plants as well as hydro power plants all function on this basic common principle. A turbine is rotated (either by the combustion of coal or gas, or directly by the kinetic energy of the water) and the turbine’s axis is attached to a generator in which a current is induced due to the rotation of the magnet within it.

The use of alternating current prevailed due to the possibility to easily scale its voltage up or down, as desired, by using a transformer. The voltage is what pushes the electrons through the conductive material. By scaling up the voltage, a current reduction occurs, leading to a reduction in heat losses due to wire resistance. This feature was decisive in characterizing alternating current, making it much more suitable for transporting electricity over long distances than direct current. Using transformers, the voltage of the power produced in the generator was scaled up for transmission. Once the current was transported to the area in which it was needed, the voltage was scaled back down in another transformer making it ready for distribution among households. Until today, our electricity grids operate in these three stages: generation, transmission and distribution.

Despite the fact that Tesla clearly won the ‘War of the Currents’ in the 1880s, we are currently observing a reemergence of direct current power transmission. This development does not only concern phone or laptop chargers, which convert alternating current to direct current in order to charge our devices, but it is also occurring on a much larger scale. So-called high-voltage direct current (HVDC) transmission has become increasingly popular in the last decades, thanks, at least partly, to globalization.

With globalization and the growing demand for energy, transporting energy over long distances is becoming an inevitable necessity. For instance, China generates a significant portion of its electricity at the Three Gorges Dam, which is located more than 1,000 km away from the densely populated eastern part of the country where this energy is needed. Through high-voltage direct current transmission, energy can be transported with much lower losses as opposed to the state-of-the-art alternating current. Moreover, the emissions produced by industrialization, which have been a driver of global heating, have made the integration of renewable energy sources into our electricity grids necessary. These are often far from where the generated electricity is consumed; consider, for instance, the off-shore wind parks in Germany, which are a long way from the country’s industrial west and south. Again, high-voltage direct current offers a technologically advanced, low energy loss alternative to overcome the fact that supply and demand locations do not coincide. Since energy demand per person will have to decrease if we are to successfully cover most of our energy consumption through relatively scarce renewable energy, any decrease in losses is beneficial.

Unsurprisingly, this highly complex technology involves tremendous investment costs and trained personnel. Such a transition will therefore only be possible gradually. China, among others, is also using HVDC to interconnect its autonomous regional grids, in an attempt to further centralize power generation and distribution with the long-term aim of creating a super grid. HVDC interconnections between grids allow for power exchange without the risk of a fallout of one grid jeopardizing the other.

René Thury (1860 – 1938), a renowned Swiss electrical engineer who already recognized the potential of high-voltage direct current in the 1880s, famously remarked about alternating and direct current that, “the two systems shake hands fraternally in order to give each other help and assistance.” His 20 MW direct current transmission project at 125 kV from Moutiers to Lyon, which covered a distance of 230 km, is credited as being the first recognition of the coexistence of alternating and direct current. However, the difference between the feud of the 1880s and our use of direct current today is that the ‘war’ was fought over low voltage electricity, which is completely different to the high voltages in use today. Moreover, the transmission distances in question were just a couple of hundred kilometers at the time, while nowadays the scale is in the thousands. At such distances, direct current losses become lower than for alternating current. The advantages of alternating current demonstrated by Tesla in the 1880s still hold true today, yet the tremendous technological developments that have occurred since then have opened the door to new scenarios.

What seemed unthinkable 140 years ago is now worth examining, with direct current becoming a potentially crucial supplement to alternating current. Nonetheless, if the Chicago Fair of 1893 were to be revamped today, it would still run on alternating current. Tesla remains the winner of the ‘War of the Currents’– at least for the time being.