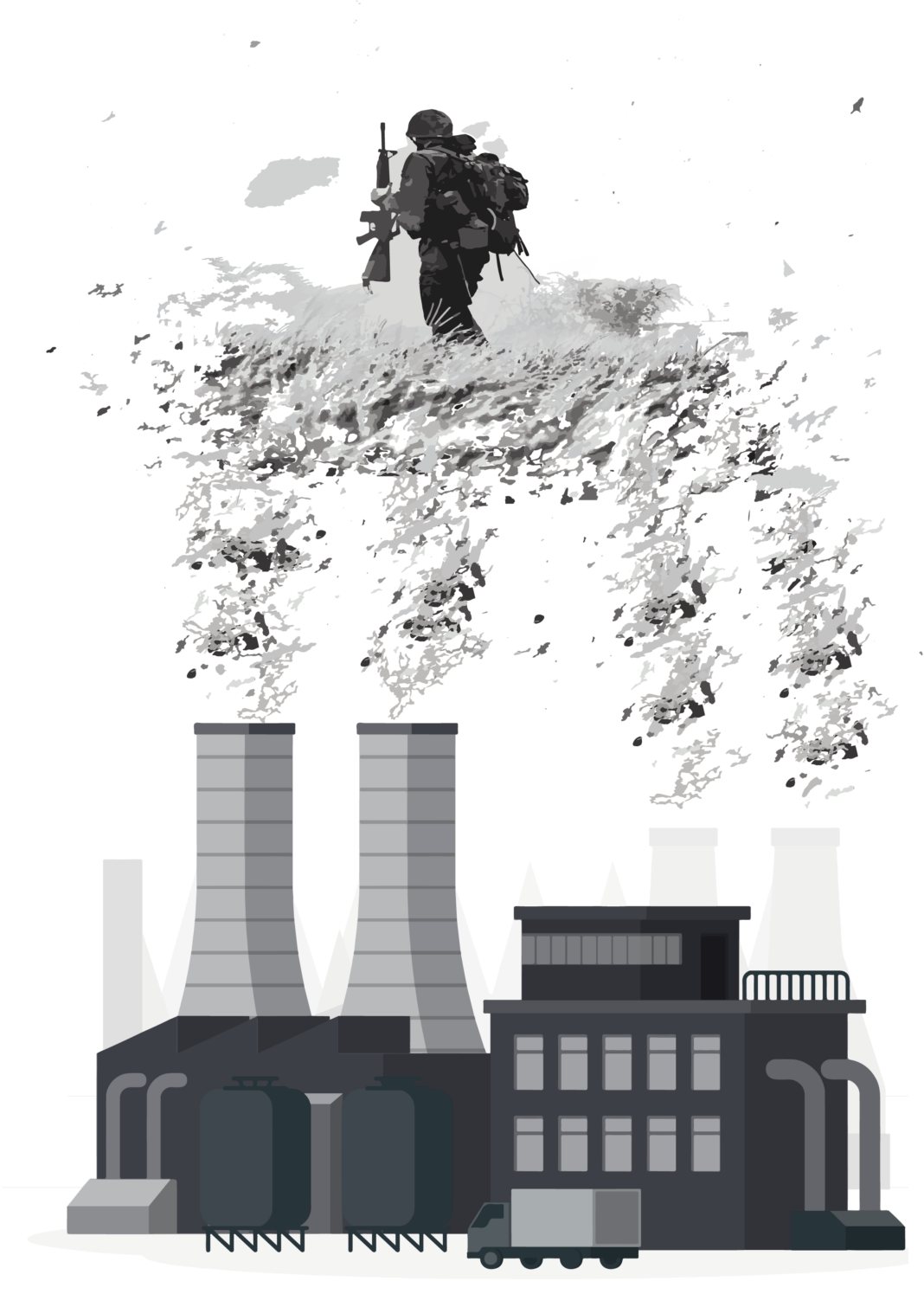 Since the general public first became aware of the effect of human consumption on the planet, individuals have been asked to reduce, reuse, and recycle in order to turn the trend of a warming planet around. Governments and the private sector alike have claimed that they are joining the masses in contributing to the reduction of emissions, prioritizing the fight against the climate crisis and the mitigation of its consequences. However, none of those actors can escape the truth that effective measures require some degree of systematic change and may mean that whole industries would need to restructure. One of those industries is the defense industry. While reliable data is scarce, scientists such as Dr Stuart Parkinson estimate that the armed forces and related industries are connected to around 5% of the global emissions.

The international community has recognized through agreements, such as the 2015 Paris Agreement, that emissions must be reduced to ensure that the planet remains livable for future generations. One key achievement of the Paris Agreement was its status as legally binding and the goal to limit global warming to well below 2, preferably to 1.5 degrees Celsius, compared to pre-industrial levels. While the plan is clear, the agreement itself includes some loopholes that impede the implementation, as there is no requirement to provide complete data on the greenhouse gasses emitted by a nation’s armed forces. This lack of complete data consequently aids governments to exclude aspects of emissions that would require them to change strategies or start reconsidering the composition of the defense sector, but it also shifts the responsibility more towards the individual instead of demonstrating that systematic change is possible.

Additionally, a number of states have pledged that they are committed to net zero, but without data transparency it is harder to hold governments accountable. Within the framework of a net zero policy, emissions are still possible, but they need to be counterbalanced by offsetting measures to absorb more emissions than are produced. At the basis of an effective net zero policy lies data, as policymakers need to know how much is emitted in which sector to decide effective countermeasures. Therefore, reliable and extensive data is crucial for the success of any net zero strategy.

Critics, such as Derik Broekhoff, a senior scientist at the Stockholm Environment Institute, argue that net zero strategies still have fundamental shortcomings due to a lack of net zero standards. Additionally, some net zero strategies fail to include all greenhouse gases or all economic sectors, creating more loopholes and exceptions. In failing to include armed forces in a binding matter, the world’s militaries and associated industries are effectively ignored. In 2019, the US military was “the largest single source of greenhouse gas emissions in the world,” according to the Brown University Costs of War project. A 2019 study by the Conflict and Environment Observatory and Scientists for Global Responsibility estimates that US military forces emitted 205 million tons of carbon dioxide- equivalent greenhouse gas emissions (CO2-eq), while the EU was responsible for 24.8 million tons of CO2- eq.

Not only those who fight in a war emit, but also those states and enterprises that have an economic interest in trading arms and equipment and thus provide the tools needed on the battlefield. Despite withdrawing from Afghanistan, President Joe Biden’s 2022 budget includes a slight increase of the defense budget, amounting to $753 billion. Given that the budget of 2023 is said to increase to $770 billion, it is implied that no prolonged involvement abroad is needed to justify a steady increase of the budget. The U.S. is not alone in this, similar trends can be observed in Europe; for example, in the U.K., Prime Minister Boris Johnson announced that the cap on nuclear warheads will increase, and a new fleet of nuclear submarines will be built.

In the context of Covid-19 and Brexit, and most recently the war in Ukraine, the British announcement can be read as one way to stimulate the economy while maintaining the standards of its armed forces.

At the moment, the strategic and economic interests of the military-industrial complex remain at odds with environmental goals because it is easier to consolidate strategic military goals with economic growth. Regardless of the Paris Agreement goals, armed conflicts will prevail.

Therefore, transparency is highly needed in order to at least attempt to include environmental goals into the picture. However, it is hard to come by in this sector, due to strategic interests and a lack of enforcement mechanisms. Those who fail to meet their goals cannot be held accountable. It should be stressed that the issue of accountability is not limited to this industry, but rather it stretches across all climate protocols and agreements of the past. The big emitters are rarely held accountable and have also not been pressured enough by the public to change their patterns. Wars will continue to threaten our world order no matter how much the temperature will rise or how much the world’s armed forces emit, regardless of whether governments share their emission data or not. At the end of the day, it is more convenient and cheaper to focus on asking the individual to change their habits than to introduce long-term systematic changes in favor of the environment.