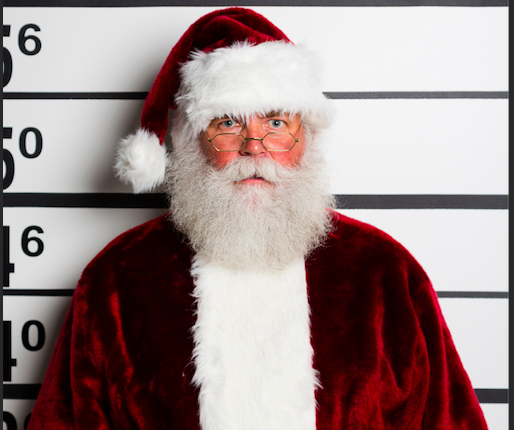 It takes roughly 10 seconds for my mind to register what my eyes are seeing. On the other side of the bulletproof glass sits a plump, bearded man in his seventies. He is slumped over in his black chair, his gaze is downcast, and his body language is that of a man defeated. He is wearing a tattered red suit with white trim. He has been summoned to a special court in the Hague, accused by the Danish government of violating the privacy rights of billions of people around the world. He goes by many names, but you may know him as Claus – Santa Claus.

Mythical characters of lore have long enjoyed a relaxed status when it comes to being under the jurisdiction of international law. According to Yale University law professor Anne Robinson, many characters, such as the Italian-born Befana, operate within the boundaries of their own country and are therefore not obviously subjected to international law. Another imaginary character, Krampus, is a known German/Austrian terrorizer of children. Yet in late 2019, the Austrian government granted him diplomatic immunity. He is thought to have retreated to the mountains of the Alpine state where he awaits the outcome of the Santa Claus trial. The international law community has been slow to catch on to the crimes of mythical creatures, but with Ol’ Saint Nick currently on trial in the Hague, that reality may soon change.

Santa’s is a peculiar case for two reasons. Firstly, because he serves as the sole legal representative of the North Pole; a police state over which he rules with the type of absolute authority that would make Kim Jong-un blush. It has been called the “Eritrea of Scandinavia” due to its culture of secrecy and its large, militarized, elven population. Secondly, Santa stands accused of using his state’s surveillance power to harvest the data of private citizens from around the world, a charge for which there is no precedent. To understand both how Santa found himself in this predicament as well as the charges against him, one must first examine the man’s rise to power.

Born in upstate New York to Swiss immigrants, Kris Kringle grew up as a child of modest means. After graduating from State University of New York with a business degree, he spent the early part of his professional life in obscurity, running a small chain of retail stores called “Santa’s Workshop.” From the outset, Santa’s business model worked by meticulously tracking the behavior of girls and boys of the world to ensure customer satisfaction and loyalty. This hardly seemed like a profitable endeavor, as data input had to be done manually. Profits were slim. Then, in 1945 Kringle struck a marketing deal with beverage juggernaut Coca-Cola, catapulting his Christmas brand and business into the spotlight. Massive success soon followed.

As it turns out, Santa’s business model was hardly scalable. Keeping an up-to-date naughty/nice list requires a substantial network of trained personnel and immense resources the likes of which the KGB could only dream. Running such an outfit is dependent upon creative accounting and the promise of an ever- expanding economy. In 2001, the US congress passed the PATRIOT Act, which gave Kringle further legal room to expand his operation further into cyberspace. Then the 2008 financial crisis hit – effectively sweeping the legs out from under Saint Nick and his Workshop. Christmas present demand plummeted, and nobody was hit harder than Claus.

In an all-or-nothing gambit to save his brand and business, Mr. Claus liquidated most of his resources and poured them into developing an AI-powered surveillance tool called DeepSleigh. The first of its kind, Santa poached talent from American and Israeli firms to build a weaponized surveillance architecture that was capable of surveillance on truly magical proportions. Digital privacy advocates call it “the grossest breach to sensitive personal data the world has ever seen.”

DeepSleigh proved profitable immediately. By attacking and exploiting vulnerabilities in smart phones, Santa gained access to the intimate details of the lives of millions of people from every country in the world. Nowadays this strategy is commonplace. The Israeli firm Pegasus uses identical software and is employed by governments like the United States, France, and the United Arab Emirates. The fact that Santa is widely considered to be a “benevolent, non- state actor” does not excuse him from such a flagrant breach of international data privacy norms.

Ho Ho How the Mighty have Fallen

“He sees you when you’re sleeping/he knows when you’re awake. He knows if you’ve been bad or good/ so…” so you should update your iPhone to the latest iOS version NOW. Santa’s surveillance tactics first appeared in a 2018 report by the London-based charity Privacy International (PI). “Due to the sheer scope of the breaches, we thought we were dealing with a state actor,” said Agim Morgan, a data analyst for PI. “An exposure of this magnitude is simply not feasible – not without the resources of a nation- state.” One year later, PI confirmed that Santa and his team effectively used data points from the devices of private citizens to determine whether those users were “good” or “bad.”

Collectively known as “Big Christmas,” business titans Amazon, Facebook, and Alphabet (Google’s parent company) have expressed their concerns regarding the implications of a “guilty” verdict. In an interview with the Financial Times, Facebook CEO Mark Zuckerberg defended his company’s pro-Santa position. “These are the people who connect us with toys, candies, and Christmas joy. We at Facebook share the Christmas spirit which unites people in celebration, and it is our belief that the charge against Santa by the Danish government should be dropped.” Another pro-Santa advocate, billionaire investor Peter Thiel has also voiced his support for Claus. “We are not talking about a dictator, here,” he explained to a group of reporters who had gathered outside the courtroom. “It’s a shame that the international justice system views his actions as threatening.”

Others aren’t having it. “I never consented to any of this!” shouts a protester in Brussels who chose to remain anonymous for fear of being put on the naughty list. “If he is going to fly around on his sleigh and continue to distribute Christmas presents to good girls and boys on the basis of illegally obtained personal data, then that man is certainly not coming down my chimney on Christmas eve!” Some, still, are less concerned. When asked his thoughts regarding the case, Luka Pahor, a graduate student in international affairs, groaned “Are you seriously writing a piece about Santa Claus? You’re joking, right?” Alas, not everyone is amused.

European states, including France, Finland, and the Netherlands publicly condemned the mythical Christmas man. They claim that his practices made a mockery of Europe’s flagship privacy law, the General Data Protection Regulation (GDPR). At the request of French security forces, INTERPOL issued a Red Notice which sought Mr. Kringle for prosecution. Last week, Santa and his sleigh appeared on air traffic control systems over the French city of Beaune. French authorities scrambled a squadron of Rafale fighter jets which promptly escorted Santa and his sleigh to an undisclosed location where French police made the arrest.

Back in the Hague, I look to my left and see a weeping Mrs. Claus in the front row. The men in suits who surround her offer little comfort. I take out my phone to distract myself from the sad scene. Scrolling through Twitter, I consider live tweeting the event. I open the camera app and raise my phone to get a photo of Santa’s predicament. To my surprise, he is staring right at me. It’s a cold, piercing stare right into my soul. I am stunned. He makes a slight wink and raises a finger to his noggin. I start to sweat and slowly, shakily I lower my phone. I’ve managed to stay off the naughty list. I’m a good boy – just barely.

Voices from the War: Language, Politics, and the Fight for Identity in Ukraine