Home European Affairs Armenia’s Old Wound – Will It Ever Heal? 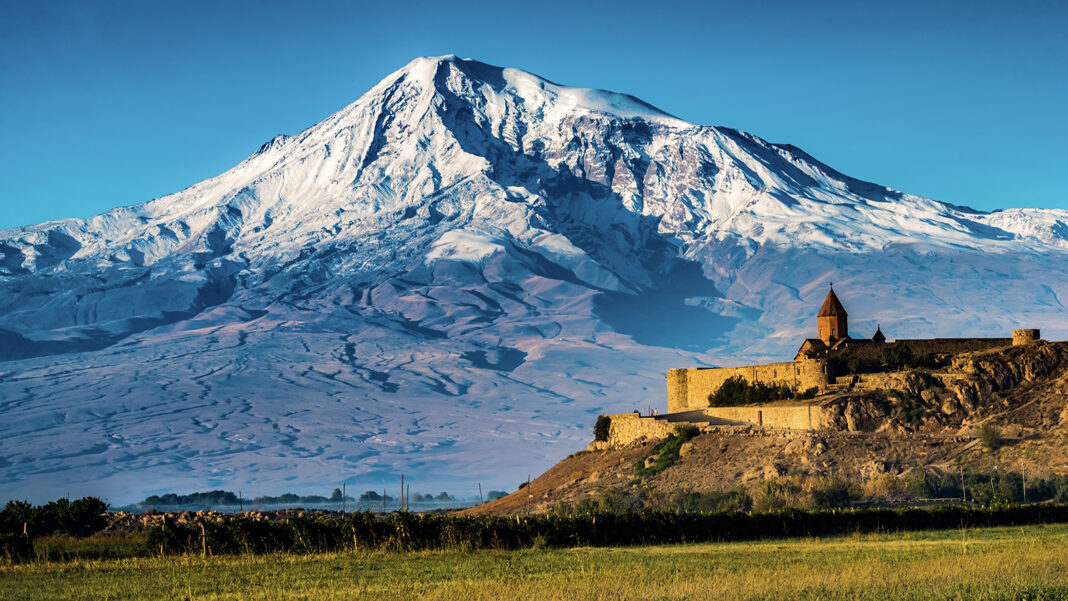 This year, on 27 September, an old wound between Armenia and Azerbaijan was reopened. The Nagorno-Karabakh conflict, referred to as the Artsakh conflict by Armenians, can be traced back to the early 20th century. The root of Armenia’s claim, however, starts in the 9th century.

Literary works by Strabo, Pliny the Elder, Claudius Ptolemy, and others confirm the historic connection between Artsakh and Armenia dating back to the 9th century. These works also indicate the rich culture of the region, which has been in peril since the division of Greater Armenia. In 387 A.D., the Armenian struggle to defend their culture and homeland began when Greater Armenia was partitioned. From this moment until the 17th century, control of the region transferred continuously from one foreign power to another. In the early 1800s, the Russian empire annexed Artsakh.  Despite the empire’s collapse, the Union of Soviet Socialist Republics (USSR) and later the Russian Federation continued to influence the region considerably.

From 1918 to 1920, Artsakh was a de facto self-governing unit, possessing all the attributes of a sovereign state. After the Paris Peace Conference 1919-1920, however, Artsakh was deemed as a disputed area. Around the same time, the newly recognized Azerbaijan made its first claim on Artsakh, which was denied by the League of Nations. The League of Nations even rejected the membership request by Azerbaijan because of its questionable and unresolved state boundaries at that time.

More than the League of Nations, the USSR also shaped the advancement of Artsakh autonomy. Against the will of the Artsakh people, Joseph Stalin included Artsakh to Azerbaijan in an attempt to placate and establish friendly relations with Turkey. The Artsakh people denounced this decision due to the cruel treatment they received from Azerbaijanis. Notably, the Azerbaijanis collaborated with the Ottoman Empire to perpetrate the genocide of ethnic Armenians. For instance, in Shushi, which was the cultural capital of Artsakh, a series of massacres took place, with the number of victims still uncertain. Stalin’s decision affects the legal standing of the autonomous region, even today.

Despite the initial contention, the conflict eventually settled, and for 70 years remained frozen until 1988. That year, the Artsakh autonomous region’s delegation requested the transfer of Artsakh from Azerbaijan to Armenia. Armenia adopted this request, whereas Azerbaijan rejected it. The central Soviet government rejected this request as well and instead set up direct rule from Moscow. The appeal sparked mass hysteria and violence from Azerbaijanis, resulting in the death and disappearance of thousands of Armenians in Sumgait and Baku. Still, Armenia and Artsakh pushed through the backlash and signed a declaration of unification the following year.

Artsakh founded its claim to unification with Armenia on a USSR law—referring to article 3 of the law of ‘’Concerning the Procedure of Secession of a Soviet Republic from the USSR”—which Artsakh to choose its status independently. In a 1991 referendum, 95% of the Artsakh population voted to become an independent republic. Both Artsakh and Azerbaijan declared independence under this legislation. Unfortunately, 11 days later the USSR collapsed, and only Azerbaijan’s claim for independence was respected.

Similar to all post-Soviet countries, Artsakh sought independence by following the procedures outlined by this USSR law. Hence, by assuming that Artsakh independence does not stand, then Armenia, Georgia, and Azerbaijan’s cherished sovereignty would also be null. Though Artsakh did not possess an equal status to the other states, it remained an autonomous region, and therefore has all the rights necessary for self-determination.

After Artsakh declared independence, war broke out between Azerbaijan and Artsakh. In 1991, tense military exchanges began when Russia and Azerbaijan deployed troops to start “Operation Ring” to take control over the Getashen and Martunashen regions.  In May of the following year, Armenia launched “Operation Wedding in the Mountains” and took control of Shushi province. Soon after, it took Lachin. By July, Armenian troops also captured the Krkzhan, Karintak, and Khodjalu regions. Armenia sustained these military operations to secure Artsakh, and by 1993, it controlled Artsakh and 20 percent of Azerbaijan territory.

In 1994, Russia mediated a ceasefire agreement between Azerbaijan, Artsakh, and Armenia. Since 1994, a series of ceasefire agreements have been negotiated. The OSCE Minsk group, comprised of Russia, the United States, and France, regularly initiate and mediate these ceasefires. At times, Russia performs this role independently. One point of contention persists during these negotiations—Artsakh representation. Armenia supports Artsakh’s claim to participate while Azerbaijan firmly rejects this appeal. Artsakh representation is still not welcome to the discussions as its approval would be an implicit recognition of Artsakh independence. Since Artsakh cannot represent itself, it must delegate its claims to Armenia. Sadly, since the first negotiation in 1994, these meetings have remained frozen with no consensus emerging. 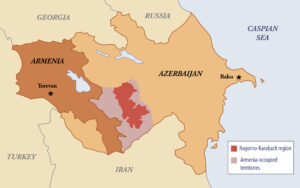 Map showing the borders before the introduction of the new agreement © Dimitrios, Adobe Stock

Throughout October 2020, three ceasefire agreements were negotiated by Russia and the OSCE Minsk co-chairs. Despite their efforts, all attempts to break hostilities failed. Finally, on 9 November, Armenia and Azerbaijan signed a joint statement. However, it is accepted by Armenians only as a betrayal from their government, as Prime Minister Nikol Pashinyan signed the statement after secret negotiations. This statement concedes the vast part of Artsakh to Azerbaijan, allowing Azerbaijan to keep the territories it occupied during the conflict and forces Armenia to concede the surrounding areas—Aghdam, Kelbajar, and Lachin. Russia deployed around 2,000 peacekeepers to guarantee the security of the people remaining in Artsakh. Ultimately, the voices of ethnic Armenians went unheard, once again, echoing the betrayals of the past.

Since the early 20th century, Armenians have only wanted to protect their historic land. Unfortunately, no one in the region shares this interest. The wishes of more powerful nations like Azerbaijan and Turkey prevail. Regardless, Armenians will not give up considering what’s at stake—our heritage.