Home From the Student Body DAfrica: the Newest Addition to the DA Societies 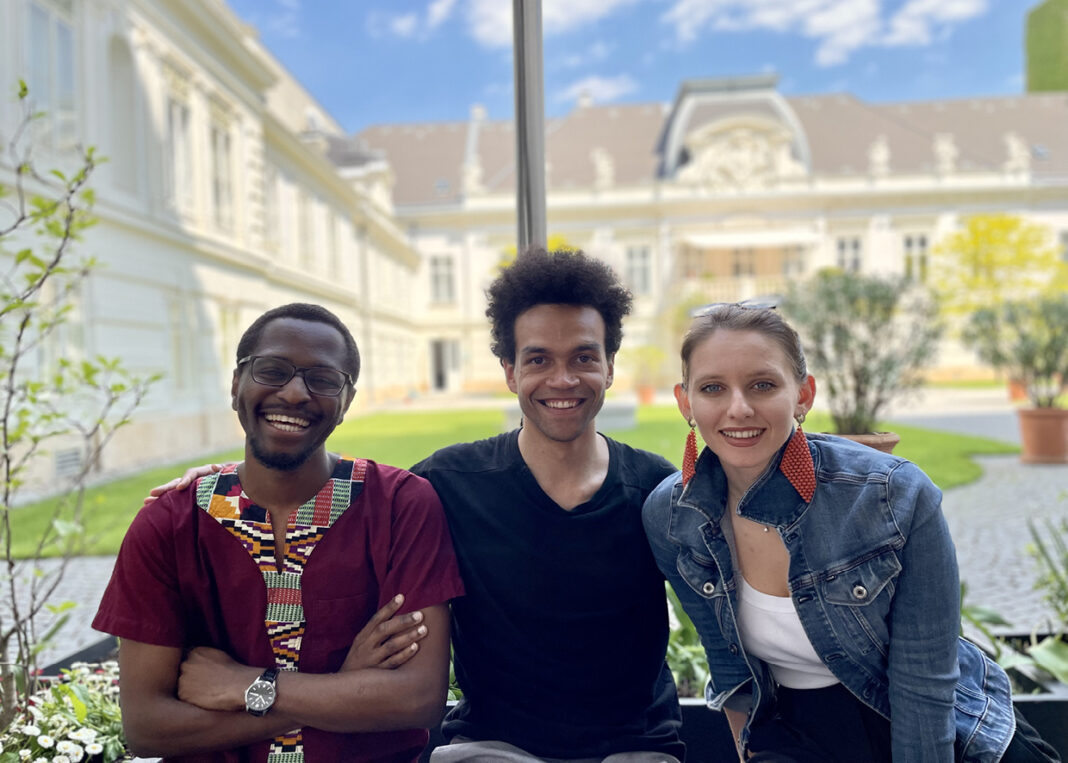 A sibilant gust of breeze brings scant comfort to this sunny 11th of May, as Alexander Guglia, Victor Kirima and Ana Badhofer, the founding members of the DA African Society fuss about their coffees, accompanied by the buzzing chatter of patrons and the occasional shuffling of Kimi, Ana’s gentle Australian Shepherd, under the table. After some formalities and enquiries amidst colleagues, the interview begins in earnest, with Anubhav Banerjee of MAIS 1 as the interviewer.

Anubhav Banerjee: To start, my congratulations for the founding of your new society! How did you three conceptualize the idea of an African society in the first place? It’s really the first milestone regarding student body participation in the third trimester!

Alexander: “It was around the time of the DASI Introduction Week for first-year students and the initial presentations by other societies when I mulled the idea of an Afro-Centric society around African cultures and the experiences of the African diaspora amidst the student body. It was only after speaking to Ana, the treasurer, and Victor, the Co-President, around November and December when the real impetus behind the society and its goals came into its own, beyond my initial pun-tastic title of ‘DAfrica’ with me as the so-called President.”

Ana: “It was in November that the now President shared his ideas with me, and I allayed his concerns about a lack of a demand for such a society, for students and alumni alike to pitch in. Many others got involved in this process, and we helped formally shape them into the concrete organization in April.”

Victor: “Yes, it was around December that I began scooping about the idea of having a DA Society around African culture. I had such discussions around the same time with students in MAIS 2 as well as alumni from a WhatsApp group dubbed ‘Ubuntu.’ Some alumni had a history of organizing African themed events at the DA during their time. Unfortunately, COVID-19 killed a lot of student activity and events, but I became interested after Alex approached me into actually formulating this incorporeal idea, leading up to this Society being formed alongside efforts and support from Alex, Ana, our other members, and the ‘Ubuntu’ group.”

AB: Given the long-standing participation of students from African countries or of African origin, why do you think that such an organization was not already present formally, or alongside other existing societies? What spaces did you think you would fill through the formulation of this group?

After a chorus of nods from all three members, Victor posits: “Well, I would have anticipated that without the impact of COVID-19 on Student Bodies and the impediments caused to the DA administration, members of the ‘Ubuntu’ group would have carried forth their participation and gone on to institute a Society. This society is also an attempt to revive the momentum of the batches’ past.”

Alexander: “It’s also important to recall how many students at the Diplomatic Academy are students from Africa rather than members from a European African diaspora. Thus, the feeling of unfamiliarity in a foreign country and setting would maybe have contributed to the lack of a prior Society, what with Austria’s bureaucracy as a seemingly daunting challenge to them.

Ana contemplates her colleagues’ responses, opining: “Of course, the language and unfamiliarity remains an issue for many DA Students coming from abroad. I would rather attribute the demanding nature of the DA programmes as the causal factor behind the lack of a dedicated backend support until the present. It’s always crucial to have members who are motivated to spend their free time in making any society a reality, and the DA African Society is no different! We want such members present and rallying behind us right now as we begin to conduct events and broaden the scope for participation that we had in mind for the months ahead. Therefore, our doors are always open for anyone who has the time and passion to spare, or the patience and fortitude to learn! We even encourage society members to step up and take on responsibility to lead in society board positions.”

All students laugh knowingly, with Alexander and Ana iterating in unison about the need for the African Society to fill a niche space through giving a visible forum for organization and participation for its members and interested parties.

AB: Of course, societies are only as vibrant as their members and as visible as their members. What did you notice about the reception and membership for the African Society so far?

The three exchange remarks about the vibrant initial reception to the event, with Alexander’s initial response being “thankful for the turnout and endorsement of the society during the April ‘Afro Tipsy Thursday’ hosted by the society, which was highly encouraging given it was only two days prior to the founding of DAfrica, making the high levels of turnout and initial memberships a sign of budding interest amongst the Student Body.”

Victor: “Of course, we wish to emulate the spirit of other societies, including our predecessors at the ‘Ubuntu’ society, in ensuring that we provide a forum for having fun and learning about contemporary art, literature, music, and media use by taking inspiration from African sources. Such would be both a relatable entrée into exploring the substantial diversity of peoples, cultures, and information that encompasses Africa, as well being exposed to cultural changes in a formal, institutional, and yet accessible manner.”

At this juncture, all three members engaged in a discussion about what members could expect, highlighting their planned concert “Concert des Continents” in collaboration with the Institut français d’Autriche, for which numbers of registered participants have already exceeded the expectations of the founders regarding their willingness to attend, promote and participate in events like these. In this case, students familiar with European Classical music are introduced to fusions of the same alongside traditional African music from different artists.

Ana further highlights: “It is critical for events and cultural exchanges, which take place amidst the international student community at the DA, to be accessible and informative in the same measure. Lowering barriers of entry would allow for people from all backgrounds with varying degrees of knowledge about African culture and diversity to equally benefit so long as they are interested, active in their participation, and show willingness to explore the diversity and cultural depths that Victor mentioned.”

9. January 2019
© Polemics - Magazine of the Diplomatic Academy of Vienna