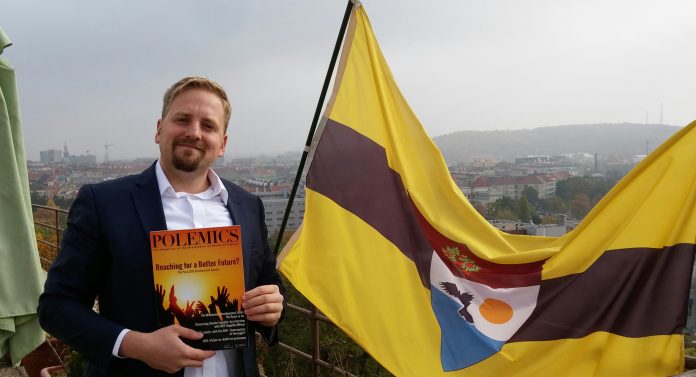 On April 13, 2015,  the world’s newest micronation, the Free Republic of Liberland, was born on a 7 square-kilometre parcel of uninhabited swamp. Situated in the Balkans between Serbia and Croatia, Liberland was founded by Czech libertarian politician Vít Jedlička, who took advantage of a decades old border dispute between the two countries.

Jedlička who also happens to be the self-proclaimed president of the tiny republic, chose the founding date to honour the 272nd  anniversary of the birth of Thomas Jefferson. According to Jedlička, Jefferson exemplifies the ideal citizen of his proposed micronation. An individual dedicated to upholding the values of life, liberty and the pursuit of happiness. Liberland in the words of President Jedlička, “aims to be the most free and prosperous country in the world with its governmental role limited to justice, security, and diplomacy. Our motto is: to live and let live”.

This is not the first time someone has tried to create a utopia on Croatian territory. In 1920 the Italian poet Gabriele D’Annunzio declared the state of the Italian Regency of Carnaro in the city of Fiume (now Rijeka, Croatia). The city-state was founded on anarchist, proto-fascist and democratic republican ideals. The country’s constitution, authored by D’Annunzio himself, gave a unique role to music by making it a central governing principle. The political experiment did not last long though. D’Annunzio was eventually forced out of power by an Italian military intervention. During its short existence, the Italian Regency of Carnaro was never recognized by any other state. Jedlička hopes that his project will avoid the same fate.

To date, no United Nations member state has recognized Liberland. Dismissed as nothing more than a publicity stunt by Serbia and Croatia, Jedlička and his followers continue pursuing an all-out diplomatic and media campaign to gain recognition. So far, Liberland remains uninhabited as Croatian authorities restrict access to the territory. Nevertheless, Liberland possesses some of the features of a functioning state. It has a government, constitution, currency, diplomatic corps and even a website, on which people can apply for citizenship.

Jedlička’s whole claim is based around the idea that the territory of Liberland or Gornja Siga as it is known on some maps, was unclaimed by either Serbia or Croatia and therefore constitutes no man’s land (terra nullius) under international law. The validity of this claim is at best dubious. However, an article published in the Chicago Journal of International Law in July 2016 gives some weight to Jedlička’s claim. The Serbian-Croatian border dispute can be traced back to the end of the Second World War. A commission established by the Communist government of Yugoslavia defined the internal borders of the constituent republics of Serbia and Croatia, along ethnic lines. However, in the regions along the Danube, Serb and Croat populations could be found on both sides of the river. This was due in part to engineering projects carried out in the 19th century which were designed to straighten the course of the Danube. Essentially, this created small pockets of Serbian and Croatian land which ended up outside of the national borders. This presented a problem for the Communist commission, which would have had to draw a snake like border between the two republics to match the ethnic boundaries.

But for all practical purposes it was decided that the border would be the Danube River itself. Initially, this did not present a problem due to the fact that both Serbia and Croatia belonged to the Socialist Federal Republic of Yugoslavia. However, during the breakup of Yugoslavia in 1991, the issue of the borders between the newly independent states came back to the fore. As a result, the Council of Ministers of the European Economic Community established the Badinter Commission to provide advice on the legal issues pertaining to the dissolution of Yugoslavia. The commission applied an international law principle called ‘uti possidetis’. According to this principle the established internal borders that had existed in Yugoslavia would now become the international borders of the newly independent countries, a decision to which Serbia and Croatia nominally consented.

But the commission did not take into account the principles of international law which deal with river boundaries. The reengineering of the Danube in previous times had caused a shift in the course of the river which created a case of ‘avulsion’. This is a principle in which a change in the course does not affect the border itself, which would remain where it was before the change occurred. Had the Badinter Commission taken this into account, the border between Serbia and Croatia might look quite different today.

The Badinter Commission’s border recommendation, however, allocated ten times more historically Croatian land to Serbia than Serbian land to Croatia. Naturally Serbia was satisfied. But, Croatia, which lost the most territory, claims that the old course of the Danube should be the border. The miniscule pockets of Serbian territory, in Croatia, are of little interest to Serbia. Thus Croatia cannot claim Liberland as its territory, because to do so would be to acknowledge the present day course of the Danube as the border. This would undermine its claim to the pockets of land on the other side.

Serbia has said that “Liberland would not theoretically impinge upon its border, which is delineated by the Danube”, according to an official Foreign Ministry statement to CNN. Subsequently, the Croatian Foreign Ministry released a statement saying that “the right bank of the Danube River is currently under the control of the Croatian border police, while the left bank is under the control of Serbian authorities”. It reasserts Croatia’s claim by stating that “large areas of the Republic of Croatia are found on the left bank of the Danube… and [once] both sides assume control of their respective territories on the other side of the Danube River, the issues as to the exact course of the state border will have been resolved”. The statement finishes by saying that “the area concerned does not involve no man’s land (terra nullius) which could be subject to occupation by a third party”.

Croatia it appears, is sticking to its territorial claims on the Serbian side of the Danube. It rules out Liberland as ‘terra nullius’, but at the same time does not claim ownership over the territory. It assumes that the Serbian territories on the right bank of the Danube, which Croatia currently controls, will someday return to Serbia. This could imply that Liberland is actually on Serbian territory, although Serbia did not claim the territory in its own statement.

This could constitute a case of ‘terra nullius’, and “the territory would belong to the first entity—in this case Liberland—to claim it”, according to Gabriel Rossman in his article, ‘Extremely Loud and Incredibly Close (But Still So Far): Assessing Liberland’s Claim of Statehood’ in the Chicago Journal of International Law. Rossman also believes that due to the complex history of this border region “it may be difficult to ascertain who the land belongs to under international law”. Regardless of the final status of the territory, the curious case of Liberland poses an interesting question for legal scholars to solve.

President Vít Jedlička hasn’t given up. “We appreciate [Croatia’s] protection of the territory. We are also grateful that they recognize there is a border between Liberland and Croatia.” He would however, “appreciate if they would start to respect the border and stop breaching it without our permission.” He hopes to make a deal with them next year.