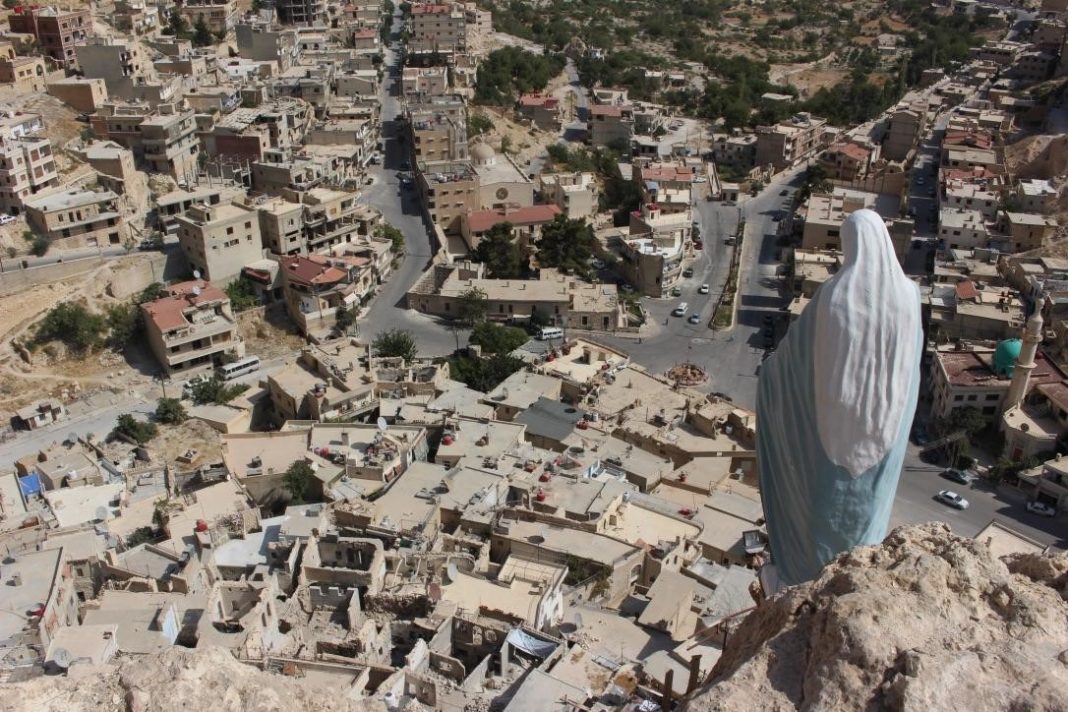 Age-old sectarian clashes, especially between Sunni and Shiaa Muslims, are often thrust into the forefront of narratives discussing the causes of the war in Syria. But six years into the deadliest war of the 21st century, what is the fate of the country’s many minority groups, including Christians, who have stayed and continue to call Syria home? Is there hope of uniting a seemingly divided nation?

Before the dawning of the civil war, Syria was a country considered home by Shiaa, Sunni, Alawites, Christians, Kurds, Armenians, Druze and Sufis alike. These diverse peoples lived together in harmony for centuries, in towns such as Malula and Qara.

An attack in the village of Malula in 2013 by extremist Sunni militias, Jaish Al’Islam and Jabet Al’Nusra, fostered a feeling of betrayal among Malula’s Christian population, as claims of Muslim civilians fleeing the village days prior to the attack gave the impression of selective forewarning.

“They evacuated the town one day before the explosion, very few stayed there, only the families of the people who carried arms against us,” said Abdo Hadaad, resident and defender of Malula during the 2013 attacks.

“That is how our young men were kidnapped by their neighbours, it wasn’t a military operation; it was a trap.”

Situated near Damascus, Malula’s history dates back 2500 years and still continues many of its ancient traditions – such as the use of Aramaic, the language of Jesus Christ. Here, Christians and Muslims have lived peacefully for centuries.

As the Old Town was sieged for a fortnight, civilians were forced to defend main roads and avoid sniper fire and mortar shells from the militias. The community was stranded in their houses, unable to fetch groceries or attend to prayers. 450 Aramaic-speaking families fled, putting the continued use of the ancient language at risk.

Three Christians, Sarkis, Antom and Mikhail, were executed for not converting to Islam, six young men were kidnapped, most of the millennia-old buildings were destroyed and churches were looted, their ancient icons vandalized.

Today, three Muslim families have already returned to Malula. Although the Christians of the village seem hesitant to welcome back coexistence, they often disregard religion as a factor in considering why their former neighbours took up arms against them.

“The attack was political and strategic,” Haddad explained, maintaining a level head despite his house being destroyed by Sunni militias.

“We don’t have sectarian thoughts, it was not Christianity against Islam. It’s a case of people taking arms up against their country and people who support and love their country.”

Only 50 kilometres away in the village of Qara, the Christian monastery St. James the Mutilated was surrounded by 60,000 Islamist fighters between 2011 and 2013, and the region was occupied by ISIS from 2013 on. Before fleeing, Sunni villagers helped smuggle food to the monastery, which also acted as a place of refuge for local families. Despite imminent danger, priests and nuns stayed and cared for the abandoned cattle, herding them and using them for subsistence.

In 2015, members of the monastery were caught in the crosshairs of an attack.

“In the mountains connecting Lebanon and Syria, just across the road from the monastery, there is a cave and a network of tunnels…which were used to smuggle men, arms and ammunition into Syria,” Tom Duggan, Frontlines correspondent and a close contact of the priests and nuns, explains. “The cave was the command bunker for Mossad [Israeli intelligence]. Its purpose was to direct all operations in the area…intelligence, tactical support and smuggling.”

According to Reverend Andrew Ashdown, a PhD student on the Christian-Muslim relationship in Syria who visited the monastery in 2015, the monastery and its residents remained safe due to protection from the Lebanese Shiaa Muslim Militia, Hezbollah.

Considering the future of the Muslim-Christian relationship in Syria, Rev. Ashdown said that “the community at Qara have witnessed…the perseverance of Christians as a living presence within Syrian society alongside their Sunni neighbours, and the capacity for the communities to live and work together to each other’s mutual benefit.

”Despite polarising experiences, many warn against the use of sectarianism when explaining conflicts and identifying causes of war.

“Before being Sunni, Shiaa, Orthodox, Druze, Kurd, Alawite, Armenian, or Catholic,” Hadaad said, “We are all Syrians”.