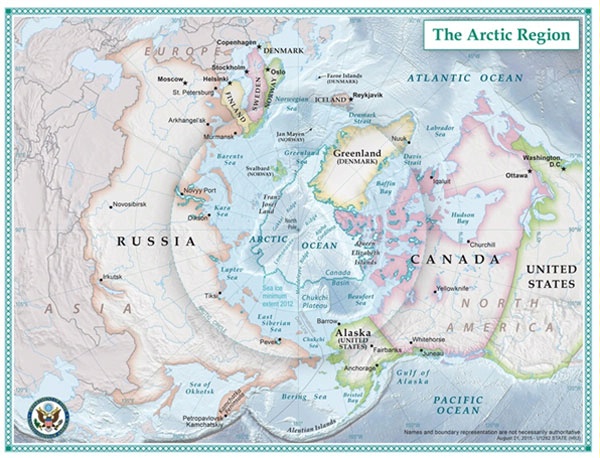 The Arctic, a region known for its natural richness and stunning biodiversity, has long been in the spotlight among scientists. However, due to its emerging geopolitical importance, the polar region has recently attracted increasing attention from both politicians and economists, who recognize the region’s strategic potential.

Most scientists still argue over the exact geographical borders of the Arctic, fueling a great dispute among the countries of the so-called Circumpolar North on how to divide this region into political spheres of interest. The term Circumpolar North refers to the countries which geographically surround the Arctic: Russia, Finland, Sweden, Norway, Iceland, Denmark, Canada and the U.S, and which are present in the Arctic Council – the most active and efficient international organization dealing with Arctic issues. But there are only 5 countries, officially called “the Arctic Five”, which have access to the Arctic ocean: Russia, Denmark, Canada, the U.S. and Norway.  This access gives them an indisputable right of the possession of the Arctic zones. In order to cooperate with each other and to solve the water border disputes, the Circumpolar countries proclaimed that they would follow the UN Convention on the Law of the Sea of 1982. The Arctic Five presented the Ilulissat Declaration in 2008 which declared the common obligation to solve the territorial conflicts and recognised the necessity to cooperate in the Arctic region.

Despite the fact that international law now regulates the relations between the Arctic countries,  disputes persist among them on account of specific political and energy issues. The political component stems from the military presence of certain countries in the Arctic. Since the Cold War, the northern regions have been a zone of active contention between Russia and the U.S. In order to protect their territories from the Russian threat, the U.S. and Canada developed the NORAD system (North American Aerospace Defense Command), which still exists to this day. The USSR had their own defense system in the Arctic, comprising of anti-aircraft missile units, military airfields, fighter aircrafts and submarine fleets. After the collapse of the Soviet Union the number of military units declined, but in 2007 the Russian government announced plans to increase their military presence in the Arctic once more. However, Russia and the U.S. are not the only actors in this region. In 2009, the Danish Armed Forces started undertaking military exercises in the Arctic  along with many other NATO member states. Norway has deployed their air force, navy and a squadron of anti-submarine aircrafts, while the UK took part in a large joint military exercise with the U.S. in 2018. The Arctic has thus become a center of military exercises, something which academics fear could generate a clash between the aforementioned powers in the case of war.

Nonetheless, the threat has also been induced by the rivalry between the Circumpolar countries for the rich energy resources of the region. According to the United States Geological Survey, there are around 29.9 billion tons of oil equivalent, which amounts to 22 percent of the world’s hydrocarbon energy reserves, and approximately 47.3 trillion cubic meters of natural gas, which equals 30 percent of the world’s unexplored reserves. The offshore fields have still not been fully exploited, which gives the Arctic countries an incentive to compete for them.

Today, the U.S. controls Arctic territories which together contain 65 percent of undiscovered oil and 26 percent of undiscovered natural gas reserves of the total Arctic volume. According to the Norwegian Petroleum Directorate, Norway possesses 1,4 billion cubic meters of the oil equivalent in the southern and northern parts of the Barents Sea. The Arctic zones of Russia and Canada contain a great amount of important resources, such as metals, minerals, ore, methane hydrate, uranium, copper, gold and diamonds. The very nature of extracting mineral deposits necessitates active influence on the adjacent territories, which is why Canada opposes Russian presence in the bordering offshore fields. China too demonstrated its interest in the Arctic energy resources by establishing its own research station on Svalbard and deploying an icebreaking polar research vessel commonly known as “Snow Dragon”.

While the Arctic has become a bone of contention, there is a common threat that might incentivize the Circumpolar countries to cooperate – the environmental component. The extraction processes in mineral fields have led to oil pollution of the northern waters, which has in turn threatened marine life. In such cases, the countries responsible for the spills often conceal important information, even when it pertains to environmental catastrophes. In 2016, the gas pipeline owned by the Hilcorp Alaska LLC exploded in the Cook Inlet at the state’s southern coast. The U.S. administration disclosed this information only in 2017, when more than 600 thousand cubic meters of gas had already leaked into the Pacific Ocean.

Despite their rivalry, the Arctic countries might still pursue measures in order to preserve the ecosystems of the Northern region. This can only be achieved by returning to the cooperative framework laid down in international law.

The Next Pandemic: A Question of When, Not If