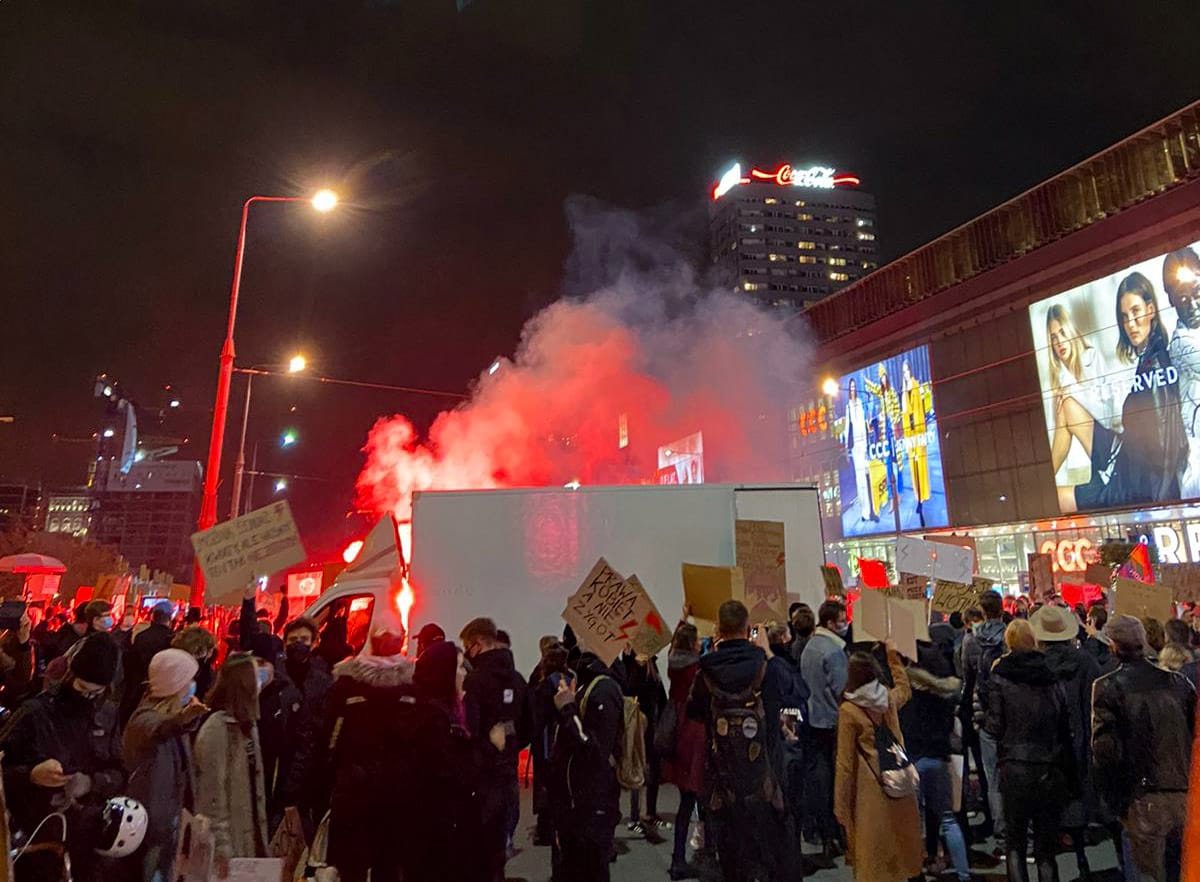 On the night of October 30, 2020, a peculiar atmosphere reigned in Poland’s capital Warsaw. The sky was lit up by the blue lights of police vans, while tens of thousands of protesters carrying signs and shouting anti-government slogans flooded the city centre. The following day, newspapers announced that Poland had witnessed the biggest demonstration since the Solidarity social movement in the 1980s, with over 100,000 people participating in Warsaw alone.

The reason behind this massive display of public discontent was a decision by Poland’s Supreme Court declaring that one of the last legal pathways to perform an abortion in the country – cases of severe impairment to the human foetus – was unconstitutional. The ruling amounted to a near-total abortion ban given that Poland already had one of the toughest abortion laws in the European Union (EU). As a result, thousands of Polish women every year are forced to travel to a foreign country to undergo the medical procedure.

Although the street protests provoked a delay in the government’s implementation of the court decision, the legal amendment finally came into effect on January 27, 2021. Hence, Polish law now stipulates that a woman can only undergo an abortion if her pregnancy threatens her life or results from rape or incest. Various human rights groups and the EU swiftly criticised the new status quo, with the European Commissioner for Equality Helena Dalli reminding EU Member States to “respect fundamental rights”.

Since then, pro-abortion demonstrations have been ongoing, albeit on a smaller scale. Restrictions of public gatherings due to the ongoing Covid-19 pandemic as well as the unwavering determination of the government to prevent access to abortion appear to have dampened the mood for large-scale street protests. Nevertheless, the law remains hugely controversial.

The wave of opposition is indicative of how polarised Polish society has become on specific issues. Contrary to popular belief, most Poles reject the idea of further restricting access to abortion. However, in its bid to further restrict women’s reproductive rights, the governing right-wing populist Law and Justice Party (PiS) could count on the staunch support of one of its main allies, the Catholic Church. In fact, the Church was the driving force behind the proposal, with the spokesman of Polish bishops even going so far as to say that taking part in pro-abortion demonstrations would amount to sinning.

A historical pillar of Polish society and a symbol of freedom during Communist rule, the Catholic Church nowadays continues to exert great influence over domestic politics and public opinion, due in no small part to its financial wealth and symbiotic relationship with the current political elite. By virtue of dozens of Catholic publishing houses, radio stations, as well as around 10,000 parishes and religious orders, the institution is able to disseminate its conservative – some might say reactionary – ideology to wide segments of the population.

Abortion is only one of the controversial issues on which the Church has taken a clear stance in Poland. Others include immigration, the fight for LGBT rights, and the discussion about women’s role in society. However, while it is true that many Poles share the conservative world view adopted by Catholic leaders in their country, there are signs that public support is not as monolithic as it seems. Some experts allege that the Church is even in the process of slowly losing its appeal.

Poland is often portrayed as one of Europe’s last Catholic strongholds. Looking back in history, this opinion seems justified. In 1989, the public approval rate for the Catholic Church stood at a staggering 90%. Today, however, that number has shrunk to a mere 41%. Many Poles strongly oppose the Church’s growing interference with state affairs as well as its tight links with political decision-makers.

Consequently, religious alienation among Poles is growing. According to the Polish Bishops’ Conference, less than 40% of the population regularly attended Sunday Mass in 2020. What is more, data published by the government agency Statistics Poland from that same year showed that only 5,5% of respondents declared being “strongly committed” to their religious faith, while 33% of them stated being “weakly committed”, and 34% saying that they were not actively practising it.

Respondents aged 25-34 constitute the least religious part of society, with more than half of them stating that they are “religiously uncommitted” or not religious at all. Commenting on the results of the survey, Katarzyna Zielińska, a sociology professor at Jagiellonian University, said that an increasingly manifest “creeping secularisation” of Polish society had been ongoing since the early 2000s.

Undoubtedly, the Polish generational and urban-rural division of opinion on/regarding the Church’s role and actions is growing. While older, rural populations tend to be more religious and supportive of conservative public policy such as the new restrictive abortion law, the liberal elites in Poland’s major cities and most Polish youth have adopted a modern lifestyle in which religion only plays a minor, if any, role at all. These sections of society are both the reason and the driving force behind the declining role of the Catholic Church in the country. And while many Poles manifest their opposition only in private, several anti-Catholic public campaigns have seen the light in recent years.

For instance, the social media campaign “I want to count” encouraged Polish citizens to declare their true religious beliefs on the 2021 national census in order to challenge the government’s assertion that Catholicism is nearly universal. Moreover, Google searches for the term “apostasy” – the formal rejection of Christianity –have skyrocketed; thousands of Poles have committed acts of apostasy and uploaded proof on a dedicated website, thereby formally “defecting” from the Catholic Church.

Given these developments, it remains to be seen whether the institution will be able to keep its dominant stance in Polish society and politics in the decades to come. If new generations continue to turn their back on the Catholic Church, the latter’s future looks increasingly doubtful. The pictures and videos of last year’s mass demonstrations add to the growing sentiment that change will come sooner rather than later.

Folly of a Nation: Nagorno-Karabakh Conflict