Home European Affairs The AKP Era: The Troubled Relationship Between Misogyny and the Istanbul Convention 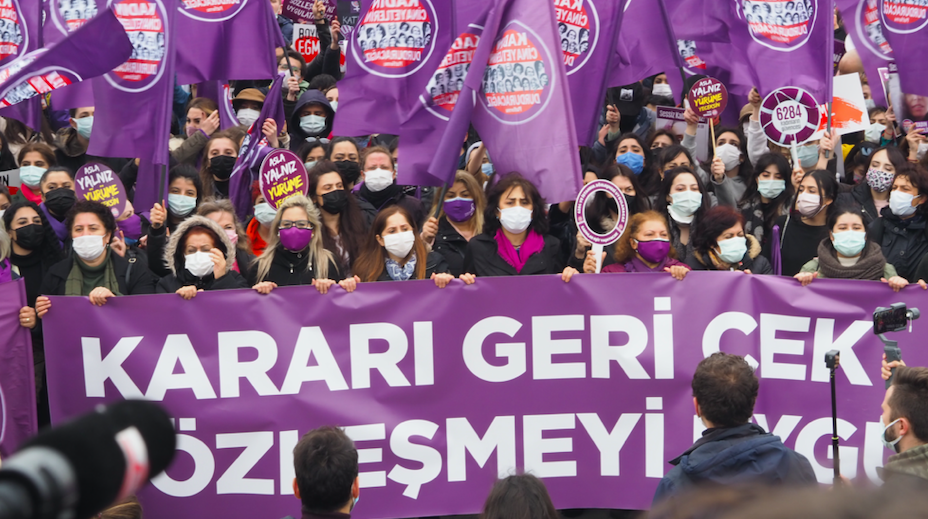 On July 1st 2021, Turkey withdrew from the Council of Europe Convention on preventing and combating violence against women (VAW) and domestic violence, also known as the Istanbul Convention, making it the only member state in the Council of Europe to withdraw from an international human rights convention. The withdrawal of the country was disappointing, particularly as Turkey had been its first signatory in 2011. It had the potential to be used as an international tool to fill the existing legal gaps granting impunity to perpetrators of femicide and encourage gender equality at the national and local level.

Turkey, the EU, and Women’s Rights

In Turkey, discrimination against women in legal, political, and economic spheres is widespread. The Justice and Development Party’s (AKP) religious conservative agenda has prioritised the preservation of patriarchal values embedded in existing societal structures. This is highlighted by the Global Gender Gap Report, which in 2021 ranked Turkey 133rd place out of 156 countries. International agreements have always played an important role as a reference point in terms of combating gender inequality in Turkey. However, the limits of their application became apparent with the observed worsening of women’s rights in the country. The Europeanization process, which began after Turkey’s official acceptance as an EU candidate country in 1999, followed the successful domestic mainstreaming of gender policies as part of the bloc’s membership conditionality. Progressive legislative reforms were made in line with the Copenhagen criteria; sexual crimes such as marital rape appeared on the statute books, and gender quotas and positive discrimination became part of the political conversation. Ratifying the Convention on the Elimination of all forms of Discrimination against Women (CEDAW) in September 2002 was an important step forward. Thanks to the 2005 legislative reforms to combat honour killings, the number of female victims drastically decreased.

Despite this positive legacy, there are limits to the EU’s normative power of promoting gender equality in Turkey. After 2007 the AKP imposed its own “religious- conservative agenda” based on opportunistic politics to stay loyal to its voter base. This approach completely ignores and marginalizes the more progressive views common in civil society and aligns its neo-liberal policies with a very conservative understanding of family, which must be “protected.” This effectively excludes support for women who do not fit the AKP’s narrow definition of a woman’s position in society.

Pro-government conservative women’s organisations such as KADEM (Association of Women and Democracy) dominate the public sphere with their faith-based justice agenda, which does not coincide with the global gender equality regime. For example, this agenda does not include equal opportunities or positive discrimination and justifies the ruling party’s hegemony by shrinking the liberal secular sphere in which many women previously enjoyed rights without being constrained by norms based on religion. EU funded projects have not been successful in tackling the root causes of socio-economic gender inequality in Turkey, one of which is related to local issues affecting women. One study shows that the beneficiaries of the EU’s Women’s Employment Financial Assistance struggle against poverty, social oppression in terms of honour, and emotional labour as major issues preventing women’s progress.

Furthermore, as local attitudes, especially in the rural areas, mainly align themselves with the conservative agenda of the AKP, norm diffusion has not been effective. For example, after the ratification of the agreement, one of the most important legislative changes that was made in 2012 to bring the domestic law in line with the Istanbul Convention, was the replacing of the Law No: 4320 on the Protection of the Family established in 1998, with the Law No: 6248 to Protect Family and Prevent VAW. This law established clear safeguards for the protection of women against violence such as providing temporary protection to those at risk, helping victims to obtain restraining orders, and restricting perpetrators’ access to weapons. However, the implementation of this law has been very limited. The Group of Experts on Action against Violence against Women and Domestic Violence (GREIVO), an independent expert body responsible for the implementation of the Istanbul Convention, previously reported on the “passivity of the criminal Justice System,” noting the lack of “data showing that cases of VAW being investigated, prosecuted and sanctioned effectively by the authorities.”

According to the women’s rights advocacy group “We will stop femicides,” Turkey was amongst the countries with the highest number of femicides worldwide in 2019, with a total of 474 women murdered. The political turmoil following the attempted coup d’état in 2016 strengthened the AKP’s conservative and authoritarian politics, leading to the decision of the European Parliament in 2019 to suspend accession negotiations due to deteriorating human rights. This overall situation has had a significant negative impact on women’s rights as with a presidential decree, Turkey unconstitutionally withdrew from the Istanbul Convention on the pretext that it served to violate traditional family norms and promote homosexuality, despite the polls showing only 7% of the population approval for the withdrawal.

The convention would have provided a remedy to Article 29 of the Turkish penal code, which allows judges to grant more lenient sentences in cases of femicide where a legal defence of ‘provocation by the victim’ is raised. The rationalisation of gender- based violence in Turkey, allowing the framing of the victim as responsible for and even deserving her fate, is allowed to flourish without the counterbalance of international norms.

The withdrawal from the Istanbul Convention has also had a significant impact on the refugee population, particularly on Syrian women who fled the Syrian war and migrated to industrial areas of Turkey, often being forced to accept arduous jobs to provide for themselves and their families. Many women and young girls have faced and became vulnerable to harassment, sexual violence, and even forced marriage due to lack of implementation of protecting safeguards. The implementation of the Istanbul Convention would have forced Turkish authorities to recognize gender- based violence as a form of persecution under the 1951 Geneva Refugee Convention, to apply a gender- sensitive interpretation to the grounds of persecution, and to develop gender inclusive reception procedures. Articles 60 and 61 of the Istanbul treaty provide a legal basis for tackling issues related to persecution of gender-based violence and non-refoulement.

By providing a legal framework to protect women from violence and promote gender equality through legislation, education and awareness, the Istanbul Convention had the real potential to bring about change. The AKP’s Machiavellian politics and stranglehold on the levers of power has made effective opposition to its social policies all but impossible: women’s rights in Turkey have fallen into this political void.

Photo Credit to Gokce Atik (Author’s note: The banner on the image translates to ‘repeal the decree, implement the convention’.)